Pressing the POSIT INIT prompt brings up the page on the FMS where you enter the known starting position of the aircraft. Our flight today will be originating from the UPS hub in Louisville, Kentucky (KSDF) so I enter the airport identifier into the data field. The information is transferred to the triple inertial reference systems and the airport coordinates are displayed on the FMS. 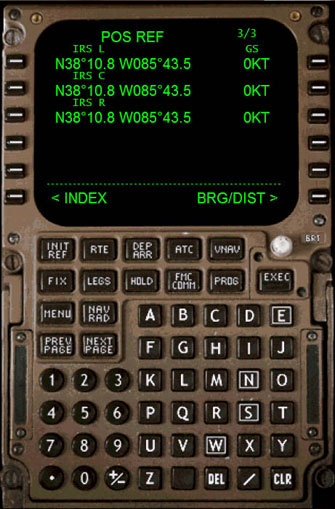 Looking up at the overhead IRS panel I rotate the knob to the PPOS (present position) selection and confirm the IRS read-out displays the same coordinates as the FMS and I double-check that those coordinates match the airport coordinates on the airport diagram. 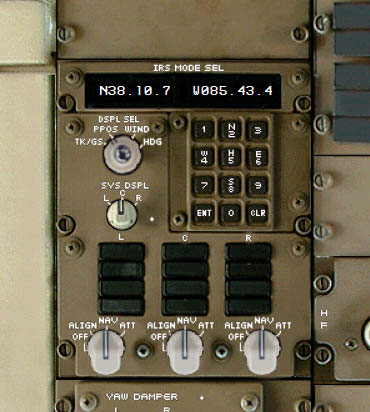 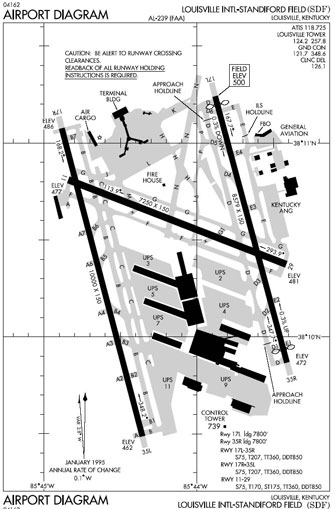 My UPS Boeing 767 on the UPS cargo ramp at Louisville; cargo doors open ready to receive pallets of cargo. (The stunning UPS re-paint was done by Mark Wolpert.) 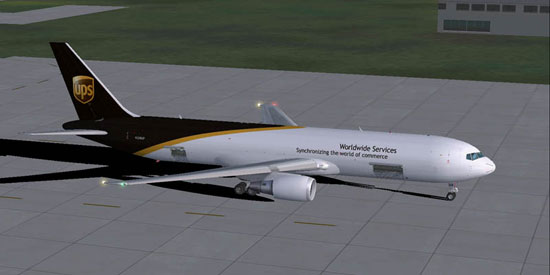 Concentrating on the tutorial PDF and programming the FMS my attention is grabbed by a “ding”. I know that sound. Looking up at the overhead panel I see the CABIN CALL FWD annunciator is illuminated. With an amused smile I press the button and a female voice calls over my headphones that “the forward passenger compartment is getting a bit cool, could you please raise the temperature in the forward compartment?” I nudge the forward, mid and aft cabin temperature knobs a bit toward the warmer side and after checking back several minutes later I see that the temperature indications have begun to slowly rise in each section. A few more times during my preflight activities the flight attendants ask for temperature adjustments and eventually I strike the correct balance and they fall silent. Even though I’m trying to suspend my disbelief since I’m allegedly flying a “cargo” aircraft, I can’t help but enjoy the interaction! 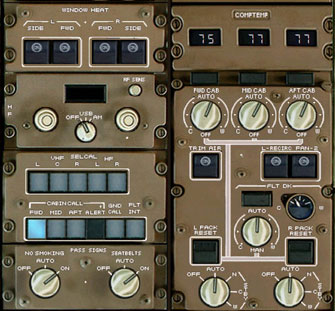 Programming the LD767 FMS is a bit more intuitive than the SSW Airbus FMC. Both use the same system of typing into a scratch-pad and then “moving” the text into the desired field on the Control Display Unit (CDU) but I find the logic and usability of the Boeing type to be superior. I enter the legs for our flight manually, our route will be: KSDF (Louisville Airport) ‘ IIU (Louisville VOR) ‘ HVQ (Charleston VOR) ‘ J78 to MIP (Milton VOR) ‘ J146 JFK (Kennedy) where we will start the NORWICH THREE arrival to KBOS (Boston, MA). 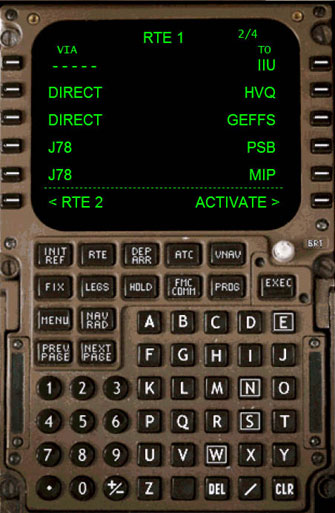 Once all the navigation data is entered into the FMS we turn to the PERF INIT page to start entering and deriving our performance data. Using numbers from our Configuration Utility I enter the zero-fuel weight (ZFW) from which the FMS derives our gross weight (403,200 lbs.) by automatically adding the fuel it senses is aboard the aircraft. Entering the charted flap setting of 5 degrees, the outside air temperature and the load derived CG allows the FMS to project the V-speeds, takeoff trim setting and thrust. 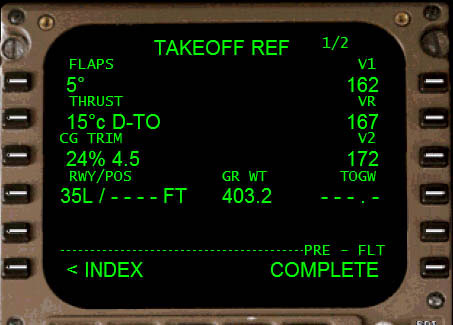 The FMS entries are reflected on the EFIS tube and the projected V1 speed will automatically show on the speed tape. Manually setting the projected V2 speed (172 kts.) into the Indicated Airspeed selector on the eyebrow panel assures me that once I hit the speed button after rotation I can comfortably pitch the aircraft to the flight director V-bars and be assured that I will be pitching for takeoff safety speed (V2). In the event I lose an engine V2 will provide the best performance for my aircraft at the projected aircraft weight. I like the fact that the LD767 uses V-bars for flight director guidance as opposed to the cross style used in the SSW A310. Level-D actually allows you to choose the type of flight director you want to fly with via the configuration menu within the sim, so everyone can be comfortable!

Much, much more can be done via the FMS, but for brevity suffice it to say I could write a whole series of articles on both the SSW A310 FMC and the LD767 FMS, they are very powerful boxes that are much more capable than your author!

So with our navigation data set and all of our pre-flight cockpit checks done, it is time to start moving! Opening the Level-D top menu I request a push-back. A small box pops up asking me for what parameters I’d like for the push-back, a nice feature!