Consulting the checklist I start the process of bringing the aircraft to life. Hitting the dual battery switches provides power to the cockpit and the displays light up giving some insight into the vital statistics of the various systems. The cockpit is dominated by the Primary Flight Display (PFD), the Navigation Display (ND), the Engine/Warning Display (E/WD) and the System Display (SD). The E/WD and the SD are part of the Electronic Centralized Aircraft Monitoring (ECAM) displays. The eyebrow panel contains all of the flight director and auto-pilot controls. PSS has included the option of “popping-up” all of the EFIS tubes to a larger size to aid in seeing all of the information clearly, an excellent feature. Notice also that the lack of a control yoke in front of the pilot allows for a sliding tray table to be extended from the panel allowing for games of solitaire, crossword puzzles, coloring….I mean consulting checklists, charts and reviewing aircraft load and balance data. 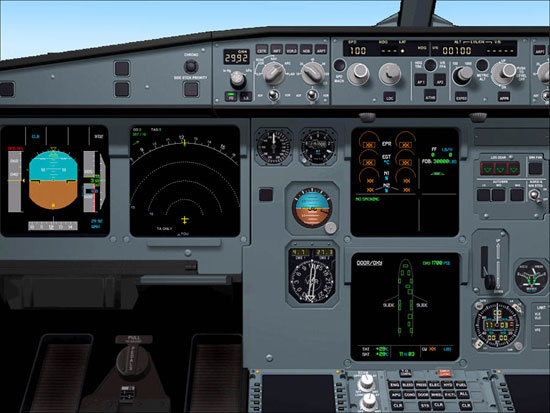 Electrical power on the ground is obtained via the two usual suspects: the APU or GPU. Firing up the APU is a simple matter of hitting the APU master switch, waiting for the APU intake door to open, then hitting the start button. The APU page automatically comes up on the lower ECAM, the aircraft anticipating that you will want to monitor the APU start-up process (eerie isn’t it?). 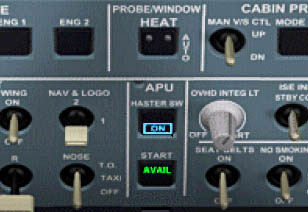 On the APU page you can monitor the APU temperature, bleed-air supply, and electrical load. 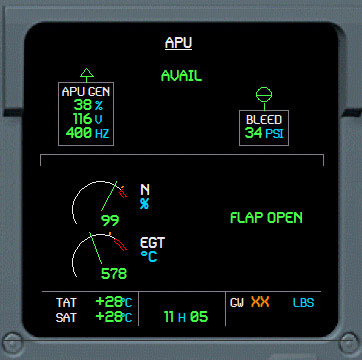 With the APU providing power it is time to settle down, pull up a comfortable chair, and begin programming the Flight Management Computer which for some reason Airbus decided to call the Multi-Function Control and Display Unit (MCDU). If the flight computers are the heart of the Airbus, then the MCDU(s) are definitely the brains. Everything from performance data, flight plans, landing weights, fuel burn, etc, is derived from the MCDU.

We start by entering the flight number, cost index (a measure of how efficiently you wish to fly the leg), planned flight level, route, and alternate airport. We also double check our LAT/LONG and align the IRS to our starting point (LFBO). 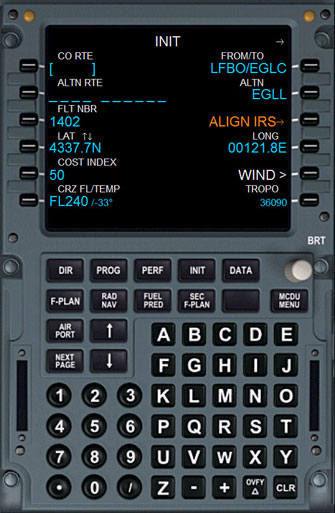 After hitting the ALIGN IRS button we check the upper panel to make sure the IRS coordinates have been properly accepted from the MCDU. 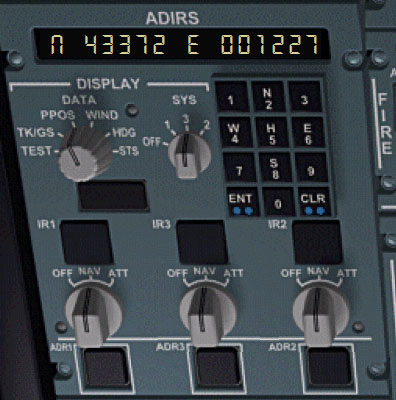 Next we go about the long process of entering our flight route in the F-PLAN page. Our flight route today will be a departure from LFBO direct via the SID to TOU VOR. After TOU we will follow 13 fixes along an airway to the ALKIN intersection which begins the STAR into EGLC. 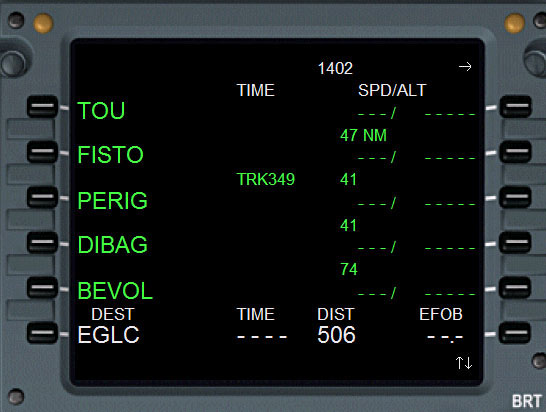 Once the complete route is entered a nice feature (and good practice) is to enter the plan view of the moving map and then scroll through each entered waypoint to observe the flow from takeoff to landing. This not only gives you a good mental picture of the route, it also will allow you to catch any gross navigation errors (due to an incorrect waypoint) before you takeoff. 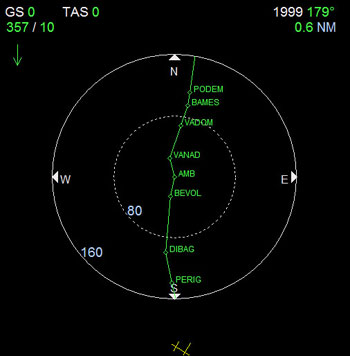 Comparing the fuel load menu zero fuel weight (ZFW) with the load editor ZFW I notice there is a 10,000 lb. discrepancy, giving me more reason to question the accuracy of the load editor. Erring conservatively on the heavier side I use the higher ZFW of 103,850 lbs. + 30,000 lbs. of fuel to come up with the ramp weight of 133,850 lbs. Entering the performance tables at 134,000 lbs., I come up with V-speeds and enter them into the PERF section of the MCDU. 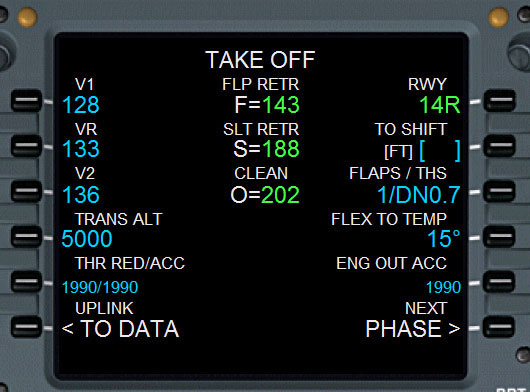