The final aircraft in our line-up is the venerable Boeing 727. First flown in early 1963, the 727 was the most successful commercial aircraft ever produced until the 737 came along and unseated her. The “old three-holer” is definitely a hands-on aircraft. With a relatively simple auto-pilot and very little in the way of automation, the 727 is a throw-back to the days when pilots sat in “cockpits” instead of “flight decks”, “stewardesses” served drinks and meals instead of “flight-attendants”, and passengers dressed up for the luxury of flying instead of wearing the typical sweat pants and sandals that pervade air travel today. Indeed, the glory days of commercial aviation came and went during the 727’s tenure.

The DreamFleet team has resurrected the great 727 for our flying pleasure and I can tell you right now, it is one heck of a ride! Despite its age, the 727 continues to serve all across the globe in both passenger and freight hauling capacities. In fact, it may surprise you to know (it did me) that the last 727 left the production line in September of 1984 after a production run of 1,832 airframes built. With the release of the FedEx “hush-kit” and continued conversion of many passenger 727s to cargo configurations, the 727 not only has a long and distinguished past, it also has many more years of worthwhile service ahead.

The DreamFleet 727 is without question, an incredibly deep product. Everything about the aircraft and documentation smacks of professionalism and quality. A cautionary note however: you are now entering the realm of less automation, more manual control and the additional workload that normally the third flight crew member, the Flight Engineer, would handle. You will have your hands full and oftentimes you will feel like you are hanging on to the tail of the aircraft as it speeds away from you! Take your time; follow the checklists and soon the cockpit will become familiar and what looks like a nightmare of systems will resolve itself into a clear picture.

The DF727 comes with a superbly formatted 172 page Aircraft Operations Manual which breaks the aircraft down into individual systems that are directly addressed by the simulation. The first few sections of the manual help you with the multitude of configuration settings that DreamFleet has enabled with their 727 including: freight and passenger loading, clickable cockpit settings, simulation settings, 2D and virtual cockpit setup and use, etc. Subsequent sections deal with fuel, hydraulics, electrical, and all of the other various 727 systems that are accurately modeled in the DF727. 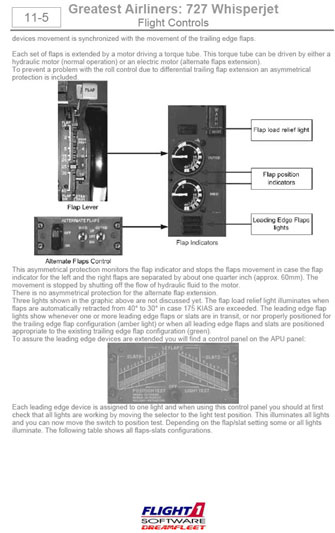 In addition to the huge AOM, they have also included a 76 page QRH (Quick Reference Handbook) that skips over the details of systems and instead concentrates on the everyday use of the systems as they relate to normal line flying. The QRH contains expanded checklists for all phases of flight from pre-flight to shut-down and also contains all of the performance charts necessary to correctly fly the DF727. You will find that flying the 727 requires constant reference to the QRH to look-up such data as V-speeds, engine settings, fuel planning data, descent planning and a wealth of other important data. You didn’t think the Flight Engineer was there just to pass the coffee forward did you?! 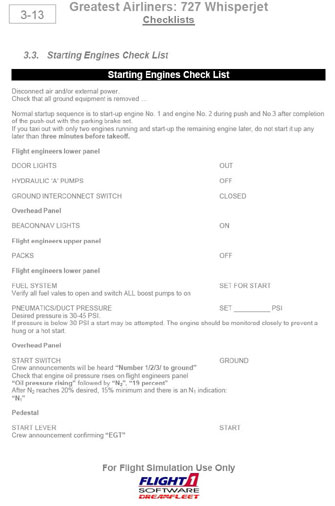 The last PDF is an excellent tutorial that covers a full flight on the 727 from loading the aircraft to setting the parking brake and shutting down at the termination of the flight. It is extremely thorough and for those people not used to having to use charts and graphs to look-up flight data it would be a wise investment of time to follow it to the letter. 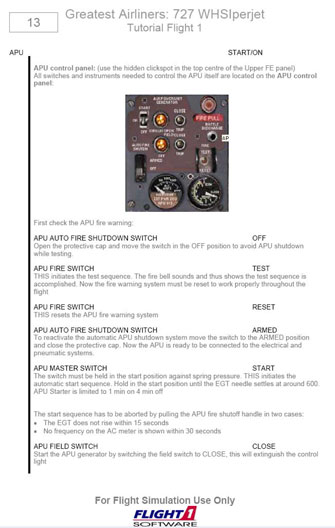 DreamFleet offers four basic types of 727: the 727-100 passenger or cargo and the 727-200 passenger or cargo. As a bonus they included the ability to fly the 727 as an EFIS retro-fitted aircraft but for today’s flight I’ll be flying the 727-100 cargo configuration with the analogue panel. In the pre-flight Configuration Manager I select the load by filling the cargo bins to whatever level I want. For my flight today I put on about 27,000 lbs. of cargo bringing my zero-fuel weight up to nearly 115,000 lbs. 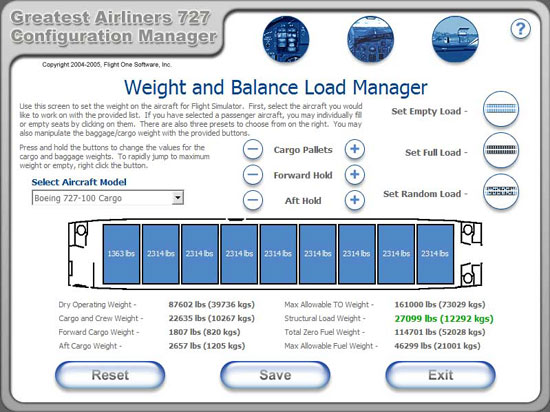 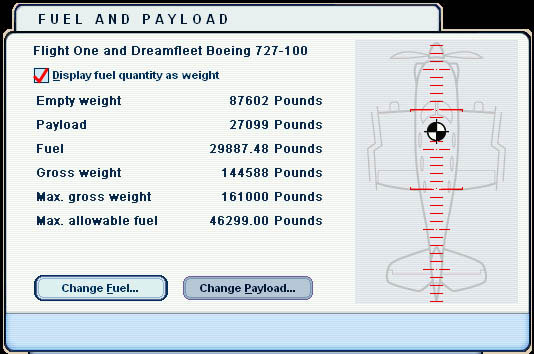