Even while I’m jumping back and forth to different areas of the panel and setting EPR bugs and adjusting CDI needles I’m hand flying the aircraft. True to all of the great things I’ve heard about the 727, she is a dream to fly; rock solid and very mannerly she has a weight and inertia to her that makes hand flying a rewarding experience. Sound modeling in the cockpit is spectacular as well and you can hear the rapid fire ratcheting of the trim wheel spinning like mad when you thumb the trim rocker on the yoke. Even though the racket the trim wheel makes while spinning would leave you to believe that a large pitch change would be the result, the trim in the DF727 is very much what I imagine a large commercial jet would feel like; nothing radical, just smooth, gentle pitch variations that feel “right”. It really is no problem to wander around to the different stations while hand-flying for quick looks and to throw a few switches.

With the blaring horn sounding in my ear however, I know that I need to get the source of the commotion figured out so I tentatively engage the autopilot in heading mode and nudge the pitch control on the autopilot panel with mouse clicks to keep me climbing in the vicinity of 320 knots. 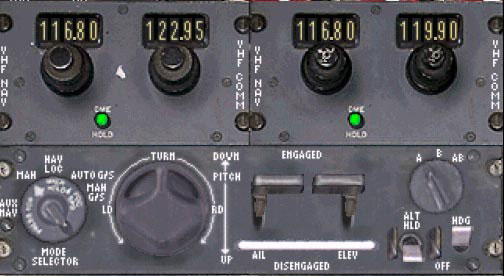 After hunting around the panels for a minute I finally spy the likely source of my aural torture. The upper FE panel containing the pressurization controls is showing an AUTO FAIL light indicating that the automatic pressurization system is not functioning correctly. I find the horn silence button above the warning lights and thankfully the cockpit falls quiet again. Initially I move to correct the fault by moving the mode selector into manual and adjusting the cabin climb rate manually, but then I spy the true problem in the upper area of the panel where the bleed air valve switches are located. During my pre-takeoff I missed the two in line switches that allow bleed air from all three engines to flow to the packs to pressurize the cabin, thus the failure of the auto-pressurization system! 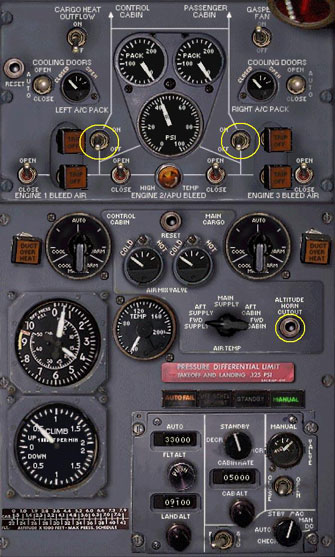 All is once again right with the world with the horn silenced, the problem remedied, and the aircraft climbing in the cruise climb configuration. After passing the SEA VORTAC I join J523 and track the outbound course from SEA to Kimberly (IMB). The snow capped mountains of Washington state slide by below as we track south-east across the state. 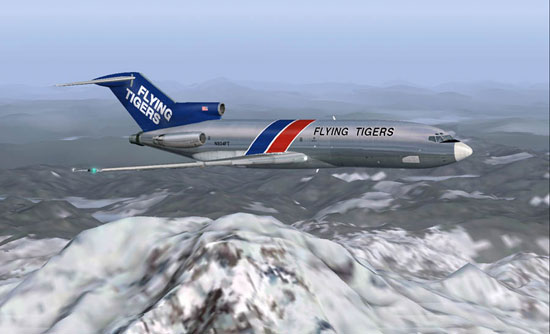 Here we are 69 miles out of SEA on the climb schedule of 320 knots, passing through 25,500′. With no FMS to provide lateral navigation, all navaids must be tuned and tracked using good old fashioned VOR needles. Moving at high speed you must keep a careful watch for station passage or intersections so that you make the course changes appropriate to the route. 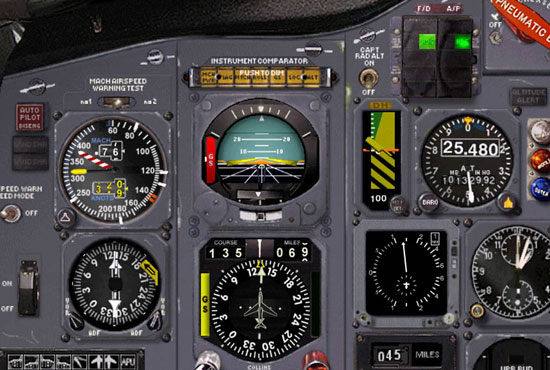 According to the chronograph on the panel we level off at our cruise altitude of 33,000′ about 34 minutes after takeoff. This is a fair bit longer than the projected 21.5 minutes we projected in the pre-flight planning, but I confess I didn’t hold my pitch and airspeed on the exact profile while I was troubleshooting during the warning horn fiasco. At 33,000′ we are putting out a nice contrail against the deep blue sky. 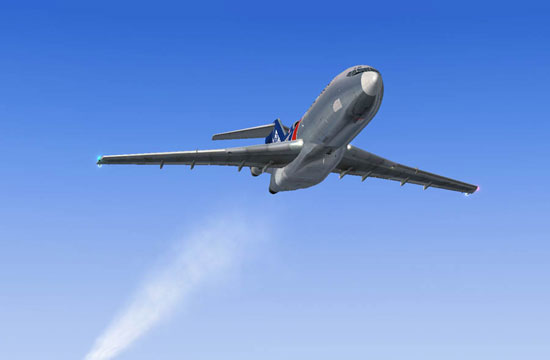 With the autopilot now holding altitude as well, I pull back the EPR to the planned cruise setting of 1.82 giving us about Mach .78 indicated, just as the charts predicted. 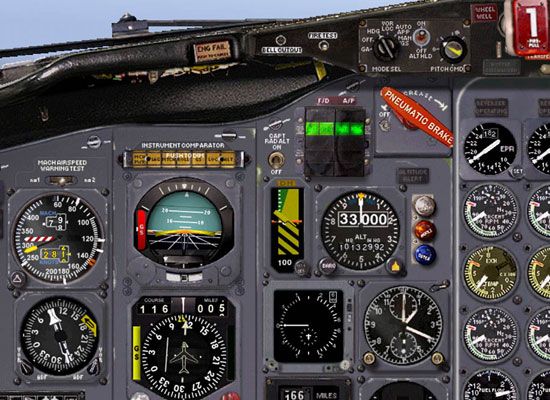