Afternoon sunlight streams through the gaps in the clouds as I go through the extensive post flight procedures, shutting down the engines and securing systems while firing up the APU and opening the cargo doors to unload the containers. The far end of the valley emerges from the clouds and snow showing just how rugged the terrain to the east of the field is. 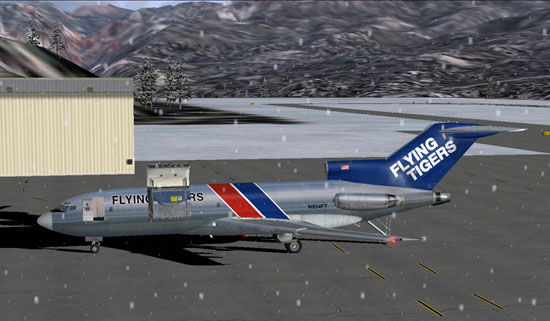 The DreamFleet Boeing 727 is a masterpiece of software design. They seemed to have captured perfectly the very essence of what flying a classic aircraft like the 727 must feel like. The systems modeling on such a non-automated aircraft as the 727 must have been a nightmare to program and bug check; yet I found not one flaw throughout the entire package. Again, the inability to detect minute flaws and bugs may be simply because I don’t know where to look, but I honestly didn’t see anything out of place. The only problem I had in all of my time flying the 727 for this article was a problem that I think is inherent to FS2004: a glitch in the battery drain logic which killed my avionics after about 30 minutes of pre-flight activity (it only occurs when aircraft are on the ground). Re-loading the aircraft fixed the electrical problem but I found I had to reset a couple things to continue where I left off (EPR settings, hydraulic switch settings and a couple more). For all of the features I’ve mentioned in this article I’ve left out scads of other features that I simply didn’t have time or space to include: fuel cross-feeding, fuel dumping, the windshear alert system, engine fires, the EFIS displays, the extensive liveries available, etc., etc. There is so much more to discuss but I’ll leave it to you to find all the features I haven’t looked at or discovered!

The manual is perfectly done. The index leads you quickly to areas that you are seeking information from and the Quick Reference Handbook is invaluable. The tables, graphs and charts are easy to use once you spend some time getting to understand how to enter into them to derive data. I’m used to using charts and tables like those found in the QRH since both the King Air and Citation use similar charts and graphs to display performance numbers for those aircraft.

The almost total lack of automation is a fun challenge. Obviously you have to dedicate some time to both learn the systems and allow for the time it takes to accomplish the actual act of switch throwing. As stated at the beginning of the article, you are doing the work of three crew-members; expect the workload to be high and the satisfaction of a successful flight to be even greater. For those less inclined to spend an hour setting up systems you can start with the engines running and be away in no time; but in doing so you are missing out on much of what is going on behind the scenes.

The 2D panel graphics, 3D virtual cockpit and external graphics modeling are brilliant. Once you spend some time with the panel selection icon menu you’ll be zipping around the cockpit panels in no time.

The sound effects are perfect, with fans blowing, horns blaring, gear rumbling, pressurization wheezing, and engines whining at appropriate (and adjustable) levels. Crew call-outs are believable and the overall “feel” of all of the sounds fits right in with the era of the aircraft.

I can’t say enough good things about the flight modeling. Not having flown a 727 in any capacity but having a lot of flying experience I feel I can comment that the flight model feels “right” based on what I imagine it would feel like. Hand-flying the 727 is a straight-forward, rewarding experience. There is no “pitchiness” or “nose bob” at all and you can simply place the airplane where you want it, trim out the controls and enjoy the stability. As a self-confessed avionics nerd, the lack of an FMS or complex auto-pilot and navigation modes was refreshing and suited the docile character of the aircraft. It is no wonder that the 727 has aged so gracefully and still serves an important and seemingly everlasting role in commercial aviation.