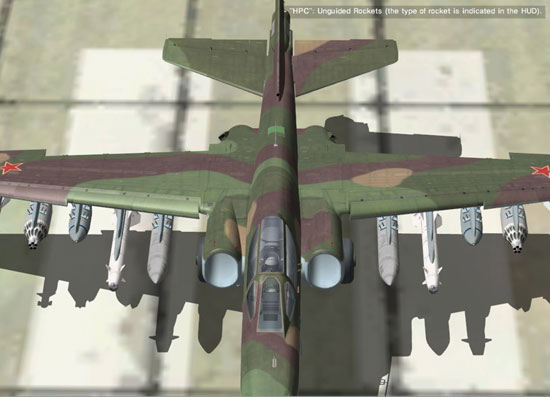 Flaming Cliffs is really a $35.00 throwback to a simpler time in simming, when games studied one airplane, just one, and simulated it closely. And it is only fitting, really, that this most Russian company wanted to look at that most quintessentially simple, and so very Russian combat aircraft, the KnaAPO / Sukhoi Su-25. Known as the “Frogfoot” to the West, and the “Rook” to the Russians and former Soviet air forces that fly it, the Su-25 family is one of the most famous combat aircraft of the modern era.

This is the true descendant of the original IL-2 Sturmovik of World War II fame, and with the American A-10 now no longer being built it is the only major dedicated air-to-ground platform in the world that is still in series production. Most people unfamiliar with the Russian air force would automatically assume that the Su-27 would be Russia’s favorite jet. After all, it is really the Russian version of the F-16 (go ahead and scream, Eagle, Hornet, and Tomcat lovers) Fighting Falcon, a total hot-rod jet, that is most identified with the United States Air Force all over the world. The good old Crane, the Su-27, is Russia’s bad boy-racer interceptor, isn’t it?

Actually, the Eastern mentality is rather more solid and down-to-earth than that. They love the Su-25 above all other combat aircraft. They adore it for its simplicity and its ease of maintenance. They revere it for its stern-ness under fire, this descendant of the concrete aircraft that so frustrated the Germans sixty years ago. They love it for its ability to pack a few necessities in pods slung under wing hardpoints and go off to unprepared airbases to fly missions with very little support. They can hang everything you can think of off those tiny wings, and when it’s clean, it’s capable of nearly Mach 1 in level flight! It is a soldier’s aircraft. And now, you can experience it for yourself, just the way the Russian public sees it. And now, you can also fly the modern Su-25T, Russia’s answer to the A-10, with its rather more advanced television-based targeting systems.