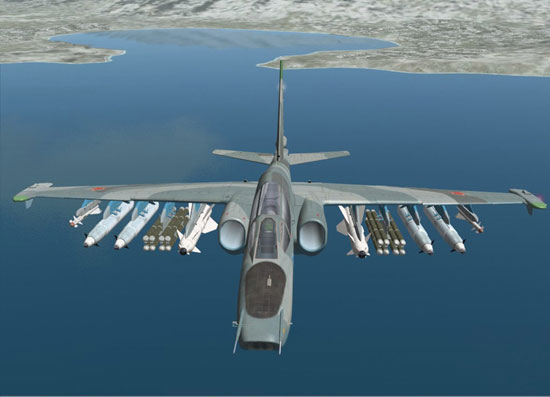 Both the Su-25 and Su-25T have several dedicated training missions, just like all the other aircraft in game. All the screenshots I have taken for this article came from them, and trust me; to be successful you need to watch them. The Su-25T also has its own Quick-Start mission, accessible from the start menu screen, as well as a new campaign and a couple of standalone missions as well. The mission editor is unchanged other than the new objects, and there are already many different user missions. I would also note that popular utilities such as LOPE and LOMAN appear to work with the 1.1 upgrade installed.The only sim out there that is more detailed than this for weapons employment is Falcon 4.0, and I place the avionics upgrades for the Su-25 / 25T in Jane’s territory, easy.

The weapons control panel in both the Su-25 and Su-25T is the same. It is now animated to look at, but unfortunately cannot be actuated on screen. One of the most consistent and continual criticisms of the Flanker family is the lack of mouse-clickable cockpits. I have never found this to be a show-stopper, but some don’t like it at all. You have to access aircraft functions via the keyboard, or you can program them into any programmable stick such as a Saitek or Thrustmster setup. In both the 25 and 25T, the WCS is basically identical, and you can now program weapons release modes and timing just as you can in other sims. In FC, you can set release timing from choices of simultaneous drop, intervals of 0.1 to 0.4 seconds, or one-after-the-other, and after selecting the type of weapon you want to drop you can select all of that type, two hardpoints, or four hardpoints, to control the number of weapons you release.

Here, I need to point out some differences between the original Su-25 and the later SUV-25T Sunrise system in the Su-25T. The Su-25 in game is the original 1970s combat aircraft; essentially the aircraft the Russians used in Afghanistan. Eagle has realistically modeled the Klen-PC laser rangefinder in this aircraft, and as you can see from the screenshots the Su-25 is still dominated by its old-fashioned reticule although Eagle has significantly improved how it works. The reticule now assists you in keeping the aircraft on target, as the little triangle shows angle of bank now. Two types of scales can pop up on the reticule depending on the type of weapon you’re employing. And you can still lock the Klen rangefinder, light up the target with a laser, and employ laser-guided missiles if you so desire. 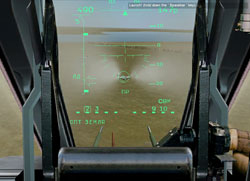 In the screenshots, the reticule’s mint-green color is not what you get out of the box, by the way. I changed that with an edit to one of the game’s .lua files; Eagle is now very modification-friendly and is providing doors into the program for modders and cockpit builders by way of .lua scripting. It took me about thirty seconds to make this change and I think it is closer to the actual Russian-built HUDs I have personally seen.