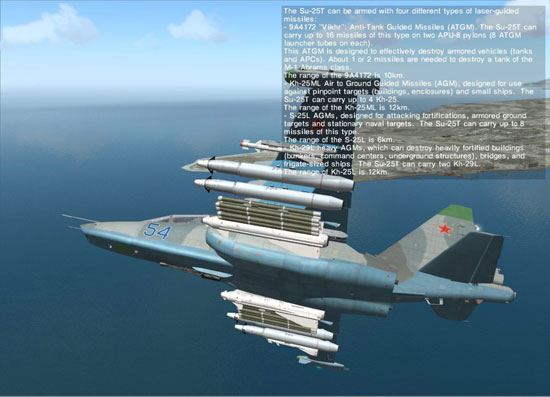 I’m going to spend the rest of my time in this review discussing the Su-25T and its SUV-25T weapons system. I’ll point out where it’s the same in the earlier Su-25. Something to note is the detail that Eagle brought to these models. The close-up of the Su-25T’s nose shows you a good look at the Krasnogorsk I-251 “Shkval” high-resolution day-television system with its Prichal laser designator. This is animated in the game. You can see it move around as you pan it from the IT-3M television monitor inside the cockpit. Slung under the belly of this Su-25T is the Mercuriy low-light-level television pod, which you use at night or in limited visibility. A light-intensification system similar in operation to systems such as the old AN / PVS-4 “Starlite Scope” used in the 1970s by the U.S. military, Mercuriy allows you to target the Su-25T’s smart weapons when the Shkval can’t see. Like the I-251, the Mercuriy’s camera shield is animated, and when you open the optics you see the detail. Its presentation on the monitor is white on black background, rather than the black-on-white of the Shkval optics. The I-251 in-game has realistic slewing limits of 70 degrees laterally and from 15 degrees up to 80 degrees down vertically, and has levels of magnification up to 23 power for close-ups.

This again is identical to the genuine article, and this exemplifies Eagle’s attention to detail. The attention to detail is monomaniacal — you can even read the numbers on the tires of this aircraft. The detail extends to the Su-25 damage model, which flies off in small pieces on both aircraft when you get hit. They also model individual systems, which makes for an interesting time when trying to land in a crosswind….