This is pretty neat. The actual Su-25T would feature the integrated Irtysh countermeasures system. It would have an internal jammer rather than the MPS-410, and SPO-32 Pastel radar warning system to back up the SPO-15 and point to threats. But those systems are highly classified and Eagle couldn’t find any info on them. So as to not default to total guesswork, the team used existing knowledge of older systems and some educated guesses, and using the Fantasmagoriya gave us a way to see enemy SAM search radars on the HUD! You can see their designation below the diamond on the HUD, and thereby you can identify exactly the threat you see. That’s important, because you have two choices of SEAD work-the Kh-25MPS “Karen,” similar to the American Shrike, and the Kh-58, more like an AGM-88. You don’t want to waste the biggest hammer on the jet on an SA-6 when there’s theater-grade SAMs around, do you? Save ‘em for the deadly SA-10 or Patriot! You designate the enemy emitter with the square cursor on your HUD, and light it up when you get the fire cue. You have to use good flying tactics, though-frequently, an enemy SAM will fire at max range and you’ll have to be patient and wait for it…. then fire and go into evasive action fast!

And you’d better be careful with that evasive action. The Rooks both have access to an all-new flight model. You will feel the effects of inertia. The Su-25 and the T both fly like trucks when fully loaded. They’re not maneuverable, and you have to think a step or two ahead of the jet in flight. You’ll fly into the ground if you wait too long to pull out of a dive, because g-loading has been recalibrated. And you can rip wings off or do structural damage if you overstress the airframe. G-induced loss of consciousness for the pilot has also been recalibrated, and it is more realistic, which means less likely to happen until you’re a little more tired now. Look out when you’re landing. You have to crab the bird into a crosswind. Put a wing down and put the nose into the wind on the glideslope, and that’s awful hard unless you’ve flown a LOT of Falcon 4.0 in your past. You don’t have thrust reversers, so pop that chute and hit the brakes hard! You’ll roll right off the runway and blow up if you land too hot. ILS is much better-I pulled off a zero-zero socked-in landing onto the runway at Sochi recently. I couldn’t see diddly til I was right over the runway, and then I saw the VASI lights just as I crossed the runway threshold. I made it because I followed the ILS exactly, and chopped throttle right when I saw the VASI under my nose. You can actually execute a CARRIER landing like that; I have seen it done though I’m not nearly that good with the Su-33. There’s no more stick-to-the-ground landing with the Su-25 and the T, my friends. You smack it down too hard and you will collapse the fully-articulated landing gear.

Did I mention the flashing beacons? It’s got those too, on the T, at least. The bottom line is that Flaming Cliffs is well worth the money, if you’re into Lock On. It doesn’t address every problem. I still see some stuttering at times where there are a lot of objects in the world and I have all the visual candy on, and in the Su-27 / 33 the head-down display’s animation still runs off of the 3d architecture of the cockpit. There has also been noted some anomalous missile behavior with active-radar missiles in spite of the changes made to them; they tend to act like a flashlight and see everything within their beam, no matter what the target is doing. There have also been instances of Sparrow SARH missiles allegedly acting like active-radar missiles, though I personally have not seen that. But FC does do what it does very well; there was a time in the recent past that we’d have paid fifty bucks straight up for the T alone, and you should see FC as a stand-alone study of the Su-25, I think. That’s what it does best, and it’s a lot of fun for the money I paid for it.

Eagle is about to take up one last patch to Lock On before it moves on to the next project, and many potential areas of focus are being discussed. Among these are the addition of the Ka-50 helicopter to the franchise, along with an avionics upgrade to the F-15 fighter. Work has not yet begun on version 1.2, but when it does I’m sure more great things will come out of Moscow. Stay tuned, sim fans, I think Igor Tishin’s got more goodies in the goody bag! 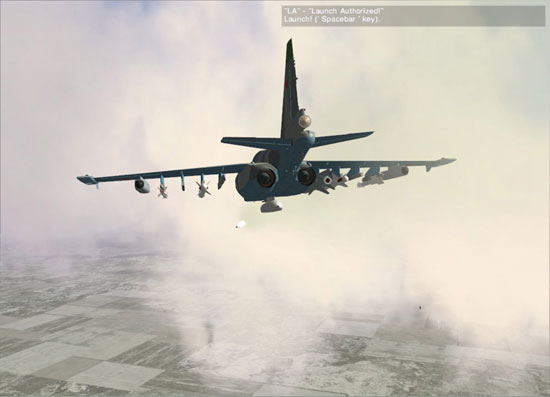