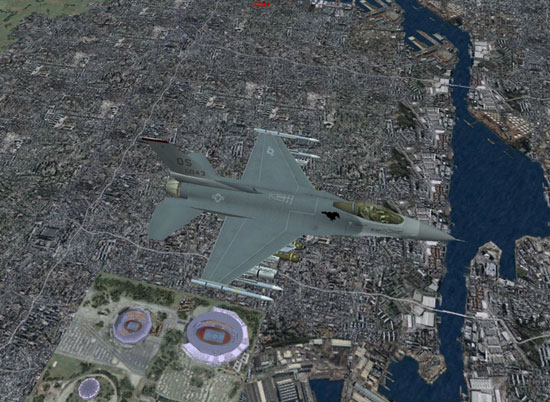 Ask any fan of Falcon 4 what the primary add-ons for the simulation are, and without a doubt you will hear the name HiTiles. The brainchild of Tom Waelti, HiTiles for Falcon 4 completely replaces the stock terrain of the Korean theatre. It adds greater variety, and much higher detail to the landscape, cities, harbor areas, roads, farm houses, and includes night lighting effects as well. Flying Falcon 4 has always been about immersion, the suspension of disbelief, and HiTiles, in the opinion of many, adds tremendously to that immersion.

On October 25, 2005, Tom announced that HiTilesAF for Falcon 4: Allied Force was completed and available for download at his site. This is the first officially licensed add-on for F4:AF and one many of us had been eagerly anticipating.

But have you ever wondered how this all got started, and how HiTiles and now HiTilesAF are made? We did, and so we decided to ask the man himself. We are pleased to present to you our interview with the creator of HiTiles and HiTilesAF, Tom Waelti.

20mm: Tom, HiTiles has been around for several years now. Please tell us how you got started doing HiTiles for Falcon 4, and some of the evolution that has taken place during that time.

Tom: Sure. It all started in spring 2002, the moment Julian “Codec” Onions, the leading brain and worker behind most of the Falcon development in the last few years (and now a member of Lead Pursuit), found out that the Falcon Graphics Engine was able to use higher resolution terrain textures than the default ones.

I really got interested once I saw some experimental tiles from the Desert Storm theatre. As I had been working as one of the “tiling slaves” on the original Balkans theatre, I knew a bit about how the stuff worked (if you fly Allied Force, watch for the delta of the river Po or the region around Assisi — my work.

My starting point were the forest ground textures — the blueish hue of the original forests in the classic Falcon 4.0 was just awful. So that is what I tackled first, during Christmas Holiday 2002. I also reworked the farm road textures — because the “lawnmover fields” and zig-zaggy roads just killed the immersion for me. This original set of tiles was released January 18th, 2003, as freeware. I then continued doing more and more textures such as farms, cities and airbases (released the day my son was born!), all available as freeware.

One day however, I realized that do something really outstanding, I needed to rework ALL the textures. But I had reworked only 300, over 800 remained. That’s where some of the fun stopped, and the hard work did begin. That’s also one of the reasons HiTiles became payware, and in addition it allows me to pay for good hosting and bandwidth, do real customer service and encouraged higher product quality.

After the release of the original HiTiles for Korea in spring 2004, I picked up redoing the Balkans theatre, as I had promised a free Balkans upgrade. This included the reworking of another 300 terrain textures, but was, in hindsight, a fortunate turn — as it prepared me for the work in the upcoming Falcon 4.0: Allied Force. Without me even knowing it!

Once news of F4:AF came out, I immediately pre-ordered from Graphsim. Once I had Allied Force installed, I quickly saw the opportunity and technical potential for HiTilesAF.

First, I integrated my previous Balkans and Korea work into a single package. Then I added quite a bunch of newly needed textures to complete the package and break up repeating patterns along coasts, roads and forests. Finally, I needed a much easier install procedure, so I had to completely rewrite my installers and the logic behind them. I also again picked up my original BMS idea of the season switcher and started to code that. Once an agreement with Lead Pursuit was in place, everything was put together and submitted to them for rigorous testing. Their feedback helped me a lot in further improving the product and also ensured that the customer gets a very positive and stable experience with the product, even in Multiplayer or when applying a new Patch from LP.

20mm: Very interesting. So, you’ve been involved with Falcon 4 since the early days. Tell us about your history with Falcon 4.

Tom: I got hooked on Falcon the moment I saw a preview screenshot in Summer 1997 (I was especially impressed by the terrain graphics!). However, I only bought it after the 1.08 patch was out. In fact, I even bought two copies (one German, one English).

My development work on Falcon started with the infamous F4CockpitManager five years ago. It was released about a week before auto-switching was introduced, so the lifespan of that particular tool was VERY short. Then I did F4Weather, a mod to add new weather patterns (cloud covers, wind and temperature) to saved missions and campaigns. This was a favorite of the community for many years, as it did work with all the Efalcon and SuperPAK series of patches. Then I got involved with documentation and was “Editor-in-Chief” for all of the SuperPAK series manuals. This is also when work on the first HiTiles started.

Last but not least, I had the pleasure to play a minor role in the BMS series, where I provided some technical feedback on the terrain engine and was allowed to work a few things into the code. I really hope that some of talent and work in there (Jam, Cobra, Mike, Boxer et.al.) can find a way towards Lead Pursuit.