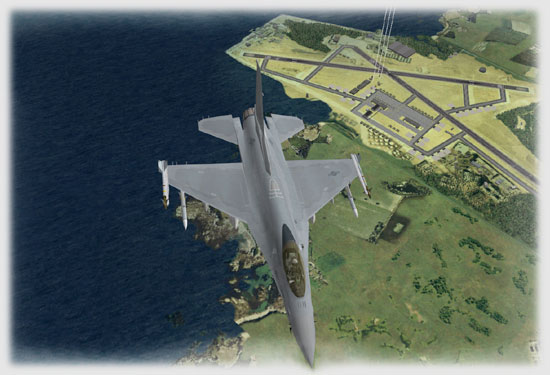 Another great report, I’m still back at Mission 2 with my training wheels tottering, but I’ll catch up. That is just an incredible view of Pusan. Question: Do you have some terrain mods added or a result of your screen resolution? 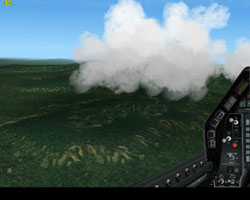 Funny how you remember things, or in some cases forget things. Like I can never seem to remember my wedding anniversary. Yet I can recall the day when I first became aware of Tom Waelti’s HiTiles add-on for Falcon 4. If only I had the SimHQ search engine to help me out with real life.

Over two years ago, there I was, reading BeachAV8R’s Training Mission Report #12 and his screenshots just blew me away. I couldn’t believe the detail I was seeing, it was so much better than my stock F4 terrain. Needless to say, Beach pointed me to Tom Waelti’s HiTiles and I became a believer.

Now Tom has done it again. He has produced the first official add-on for Falcon 4: Allied Force, HiTilesAF. We’re going to take a close look at this product from a number of aspects and give you our impressions of it. We’ll see how it looks at altitude as well as flying NOE (nap of the earth) and at night. We’ll look at performance issues at various settings. We’ll give you our opinion on whether HiTilesAF will help you spot ground targets on your next BAI or CAS. And we’ll answer the question of whether or not HiTilesAF adds to the immersion factor of a sim famous for that attribute.

“We” is “20mm” aka Tom Hayden, and “guod”, aka Doug Atkinson. Guod will work the technical info like frames per second, video card settings at different resolutions, with anisotropic filtering and anti-aliasing at high and lower levels, etc. 20mm will just fly around and offer his typical off-the-wall comments. Get the picture? 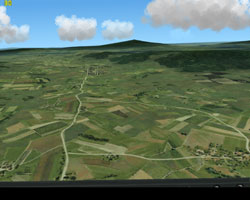 You will and plenty of them!

HiTilesAF is a graphical terrain add-on to a simulated world. That world consists of two theatres, Korea and the Balkans, and we’ll look at both. And since this is all about graphics, we’ve taken a whole bunch of screenshots to illustrate as best we can what HiTilesAF does. Guod took his screenshots using controlled settings. 20mm flew around taking interesting snapshots and making notes about what he observed.

We thought one way to illustrate the difference between the stock Falcon 4: Allied Force terrain and HiTilesAF is to rerun the mission 20mm made in his F4:AF Mission Builder Review. The Marlboro Country airbase strike mission is here. We endeavored to take screenshots at roughly the same vantage points as best as possible so you could compare and contrast the differences. Guod also did the same thing in the Korea theatre at one of 20mm’s favorite targets, Wonsan Air Base.

And we have a few other goodies in store to show, so rather than spend another 1,000 words trying to describe a picture, let’s get graphical with HiTilesAF.