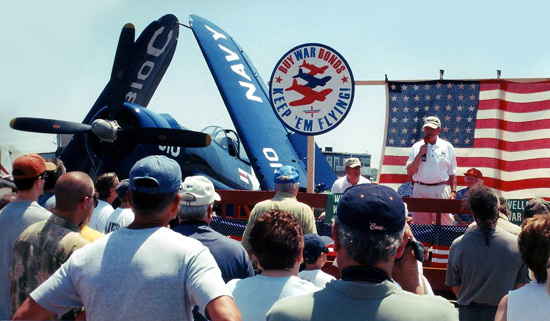 Flying with a Legend

Frank Clark of VMF-311 told a tale of how he came to know Charles Lindbergh, who spent six months in the Pacific as a civilian tech rep for Vought.

“Lindbergh was flying around the South Pacific for Vought teaching all of us how to fly better… go a little faster, take off from shorter fields. He was my idol from the time I was a kid.”

“We’d sometimes go up to 10,000 ft, dive to 6,000 ft., and drop our bombs,” Clark said. “Lindbergh was doing wonderful work and stopped by our island. We began taking gun runs with him every day, and the Japs were of course firing back.”

One day, Clark discovered a cache of 2,000 lb. bombs at his base, which were intended to be used when the runway was lengthened to support heavy bombers. Because those plans were on hold, he approached his commanding officer and requested permission to find a way to mount them on the Corsair’s centerline. Using his unit’s “fantastic” welder, the group jury-rigged the pylon to carry the 2,000 lb. bomb, and then hung 1,000 lb. bombs on the next pylons out.

“One day, I was called to my CO’s office — I figured that I was in trouble for something. He said, “Col. Lindbergh wants an explanation for how you can put a 2,000 lb. bomb on the Corsair.”

Clark showed Lindbergh the hand-made method used, and “Lucky Lindy” spent about two weeks with Clark and his crews updating the possibilities of adding larger bombloads to the aircraft.

Clark recalled that he often would fly a photo-recon variant of the Corsair to capture pre- and post-strikes on the missions with Lindbergh.

Lt. Col. Tommy Thompson recalled a defensive patrol when a lone Zero was spotted below, frantically trying to shake loose a hung bomb underneath.

“We thought he might have been a kamikaze, but the harbor below was full of ships, and he never tried to dive at them.”

Thompson came up from behind and fired a quick burst.

“It went right into his engine, which blew off an engine panel that flew back and hit my Corsair. His engine was smoking and I made another pass from his 7 o’clock; this time my burst went into his cockpit. As I came off on the other side, I could see his canopy was covered with blood.”