Capt. Bernard “Peter” Peterson flew the Corsair in both WWII and Korea, and experienced a remarkable slice of the early days of the Pacific Theater first-hand.

Peterson was an Aviation Machinist’s Mate for a torpedo squadron based on the USS Saratoga. Shortly after the attack on Pearl Harbor, he found himself as part of the force hoping to resupply Wake Island from the impending Japanese invasion, ferrying Marines and aircraft destined for the doomed outpost there. The Japanese captured the island while the relief force was still 250 miles away, so Peterson spent Christmas 1941 near Midway Island, where they unloaded the Marines and equipment. About a month later, he was onboard the Saratoga when it took a torpedo hit and limped back to Pearl Harbor for repairs. While the flattop was being repaired, Peterson’s unit was transferred to the the USS Yorktown. During the Battle of Midway, he and the others were forced to abandon ship when the carrier was struck and sank. Peterson’s string of bad luck continued when he was transferred to the USS Enterprise, which was then supporting the Marine landings on Guadalcanal late in the summer of 1942. He was on board when the Enterprise was then hit by three aerial bombs in August and had to return for repairs as well. 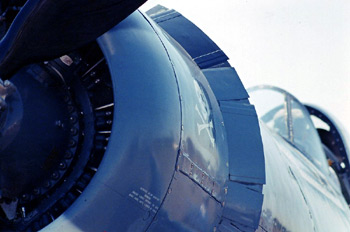 While in New Caledonia in January 1943, he learned that he had finally been accepted for flight school. His first assignment was with an SBD-5 dive bomber unit (“I hated it.”), and then later with a Corsair squadron. His service didn’t get any easier…during flight training, Peterson was forced to bail out of his Corsair over Florence, Florida after an engine fire, but eventually completed his qualifications and was sent to Bougainville with VMF-223, the “Bull Dogs.”

“I was happy to get there. I definitely didn’t want to be on any more carriers!”

Peterson flew with VMF-223 in the Philippines and eventually Okinawa, where the unit defended against inbound kamikaze attacks, but primarily bombed Japanese airfields. On one particular mission, Peterson recalled that they destroyed an estimated 50 Japanese planes on the ground using proximity-fused bombs.

Peterson flew straight through the end of the war.

“I was actually flying an air patrol mission when the Japanese surrendered. I kept one station on VHF for combat, and another with news and music broadcasts. That’s how I heard the announcement that the war was over.”

After five years without flying, he was recalled to service for duty in the Korean War and retrained to fly the Corsair again. Assigned to VMF-212, Peterson found himself flying a brand-new Corsair, and completed 60 missions in his second war with the “Devil Cats.” Combat wasn’t over for him, though….during a subsequent tour as a ground-based forward air controller with the First Marine Division during the Battle of Bunker Hill (Hill 122), Peterson was wounded by shrapnel and was laid up for six months, after which time he left the service and began a nearly 40-year career with Allied Signal.

He is the author of the book “Short Straw: Memoirs of Korea.”