A Flock of Black Sheep 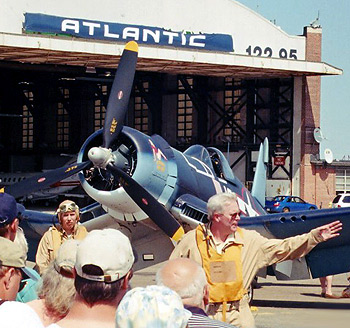 Four of the fourteen remaining members of the famed VMF-214 “Black Sheep Squadron” were in attendance for Corsairs over Connecticut, and their stories each invariably came back to their respect for their commanding officer, Major Greg “Pappy” Boyington.

“Pappy always wanted to go on fighter sweeps… on one sweep to Raboul, bad weather came in fast and we had to turn around. It was getting cloudier, with lower and lower clouds, and by now we were getting very low on fuel. As our flight of eight came out under the clouds at around 800 ft, we flashed right over four Jap transport ships loaded with troops. They must have thought that was some sight… eight Corsairs flying right by! We were just too low on fuel to turn around and attack them.”

A few minutes after the Corsairs passed the ships, Emrich’s engine quit.

“You know, I always wondered when the time came if I would choose to bail out or try to ditch…well, when your engine dies that close to the ground, you don’t have a choice!”

Emrich’s Corsair hit the water hard; “I thought I’d died and was going to heaven” When water started flooding the cockpit, he struggled to get out, but was still strapped to his seat. Just as he finally climbed out onto the wing, the Corsair disappeared under the water. Emrich was picked up a short time later by an American vessel.

Lt. Col Jim Hill has nothing but praise for Boyington.

“You couldn’t find a better leader in wartime than Pappy Boyington. We’d have followed him anywhere. He was personally very courageous; the fellows who flew in his section always saw a lot of action, and he rotated us in and out of that to allow us to get experience.”

Hill was flying with Boyington on the day the ace was shot down and captured.

“On the day Pappy was shot down, it was a bad mission from the start. On our way to the target, we lost two of our flight of twelve to mechanical problems, and then when I went to test my guns, they didn’t work. I had flown 70 missions, and this was the first time they didn’t fire. I tried everything and just couldn’t get them going. My radio stopped working, and as I turned around to head for home, my compass started spinning wildly. I figured that I could still find my way back, but after a while, I started thinking “This is it.” All of a sudden, my wingman, Al Johnson, flashed in front of me, waved his wings to have me follow him, and led me home. He had watched me leave the formation earlier and had followed me.”

“We were flying cover for an SBD dive-bomber attack with sixteen Corsairs. Much higher up were some P-38s as well. The mission was to hit shipping in Bouganville, but the weather closed in, so the strike leader changed the target to the airfield nearby. As the SBDs went into a dive, we were jumped by Zeros. I had one on me, so I flew into a cloud to lose him. When I emerged from the other side of the cloud, I looked out and saw a Zero right in front of me, which I shot.

By now we were all spread out — the dogfight began with a tight circle of airplanes and ended up spreading out over miles — and I turned around to fly back.”