Bourgeois then had an experience that would follow him for decades.

“I was flying back dumb and happy, and all of a sudden tracers started flying by my cockpit. I quickly dived, but the Japanese plane managed to stay on me. I closed the cowl flaps to go faster, and watched the engine begin to overheat. I was just about to turn and engage him when he turned around.”

In 1973, Bourgeois was on a business trip to Mitsubishi in Japan.

“I immediately warmed to one businessman in the marketing department, who I found out also flew in the war as a squadron commander. We started talking and realized that we flew in approximately the same region at about the same time. When he came to the US, we got together and compared logbooks… he had been the pilot chasing me that day! On his next trip to the US, he presented me shotgun as a gift and we went on a wonderful hunting trip together. After a great dinner that night, he said “I’m sure glad I didn’t shoot you down!” 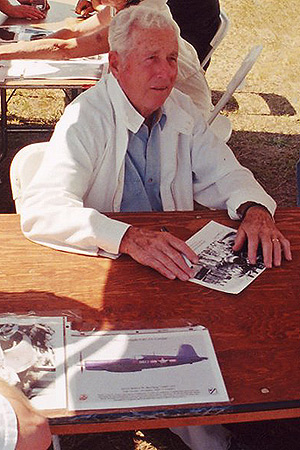 Black Sheep squadron ace Bob McClurg (7 victories) started off his recollections with a wartime Black Sheep song dedicated to the ladies in the audience, saying that the squadron sang a lot together and entertained themselves on whatever airstrip they operated out of.

“My first fighter was a F2A Brewster Buffalo. It was like flying a rock. When I first came into the barracks of my Buffalo squadron, I couldn’t find anybody at first. Eventually, I found them all in the back playing Gin Rummy, and each of them had some kind of cast on. They looked up and said, “You don’t have a cast; you must be new here.”

McClurg had only 25 ½ hours of total fighter time when he first met Boyington.

“He told me, “You’re never going to make it.” But Pappy finally told me to take the Corsair up to 7,000 feet and come back down for a landing. I made a terrible landing right in front of him. He came over to me and asked, “How’d you like it?”

“You’re lying to me,” was Boyington’s reply. “I flew with Chennault and that plane scared me when I flew it for the first time.”

McClurg described five-hour long escorts of B-24 missions, the humorous perils of using a canteen as a relief tube, watching fellow ace Joe Foss and Boyington wrestle (‘Foss just threw him into a corner’) and more, including his own first kill.

“The first time I was shot at, the guy was flying right at me, and I kept thinking “Does he have flashing lights on his plane?” I quickly realized that the flashing lights were his guns firing. I was in a skid at the time, and he missed. I corrected my skid, put my nose on him, fired, and he blew up. I was so scared that my tongue swelled up in my mouth.”