The stick and throttle were both older Suncom peripherals, scavenged from eBay. Later models will use in-house metal cast grips. Both inputs tied into Keyboard Studio to facilitate easy programming. By the way, the Thrustmaster Cougar might be the ne plus ultra of simulation input devices, but they’re not even close to the real thing. Want the real ones? Go spend $25,000 on MSI sticks used by the military. The tail hook and landing gear levers were both fully functional. Every panel had switches that did something and the MFDs each had the buttons that could be used to make them fully functional, provided you want 5-inch LCD screens in each MFD. Wonder where they get LCDs that small? They’re the LCD screens that come out of the off-the-shelf Playstation 2 portable LCD dock. They crack them open and peel away all the plastic until only the screen remains. 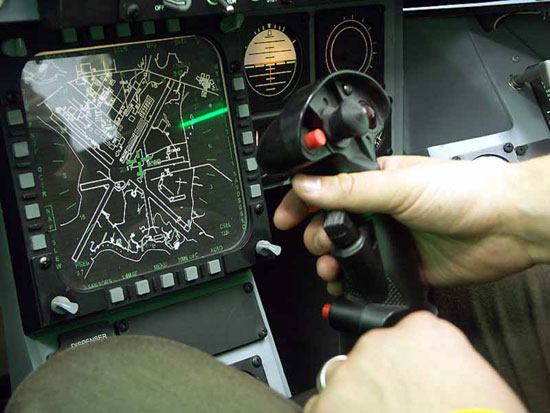 The other gauges are static and the demo model we checked out also had static MFDs as well. Unfortunately, no combat flight simulation title commercially available incorporates individual MFD displays. The only one that does is FS2004, which is not combat-oriented. 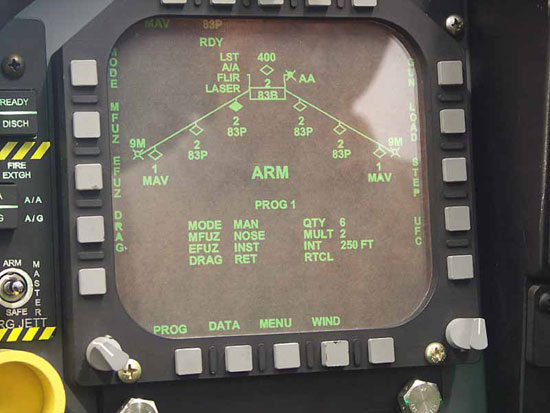 My external views came courtesy of a Sony LCD 2000 lumens projector. Eventually, Miller hopes, the final product will ship with no less than three plasma screen displays to give the pilot the wraparound experience. Sound is accomplished by a full Klipsch surround-sound speaker setup built into the cockpit, the subwoofer under my seat literally shaking the fillings in my teeth.

Which brings up another point. Some at SimHQ were wondering if the cockpit was sold with the software used by the Navy to train its pilots. No. That information is classified, and let me tell you something that will surprise you. For all of the arguments over flight models, weapons models, and damage models we’ve endured on our boards, the flight model code and weapons model code for the Navy’s proprietary simulation program fits on a 1.44MB floppy. I’m not kidding. “Where you really need the gigabyte upon gigabyte of computing horsepower,”he mused, “is in the out-of-the-window views.” “PC computers in the home,” he continued, “cannot equal the power needed to render the world in military-grade training tools.” Miller built one full-motion RAH-66 simulator used in a trade show in Ottawa that needed six (count em’, six) dual-core Pentium Xeon processors just to accurately model the behavior of Co-Pilot/Gunner’s station on the Comanche

Miller and I had a long and candid discussion about the direction of the flight sim industry. Like others, he’s concerned about the dogged pursuit of realism killing the profitability of simulations. “Simulations need to be shipped to install in the dumb-as-dirt mode,” he explained. This is an opinion coming from someone with twenty years’ experience in building avionics and simulation cockpits under his belt. “That way, the customer can choose to try it out and once they master something, they can increase the fidelity incrementally all the way up to the real thing.” He, like many others, has watched in frustration as the pursuit of bleeding-edge realism (which generally results in lackluster sales) has made publishers wary of investing money in simulation titles. His understanding of simple economics shapes his opinion. The consoles represent a larger market and the market that demands high-fidelity flight sims seems to be a small, ungrateful lot. “How are you going to know what an F-16 will do, and I mean really do, unless you fly one on a regular basis?” he asks rhetorically. That being said, the two software titles used to demonstrate the capabilities of this machine were Microsoft’s ubiquitous Flight Simulator 2004 with the freeware F/A-18E (Hornet pilots with thousands of hours of stick time say it’s the best one) and Graphsim’s F/A-18 Operation Iraqi Freedom. 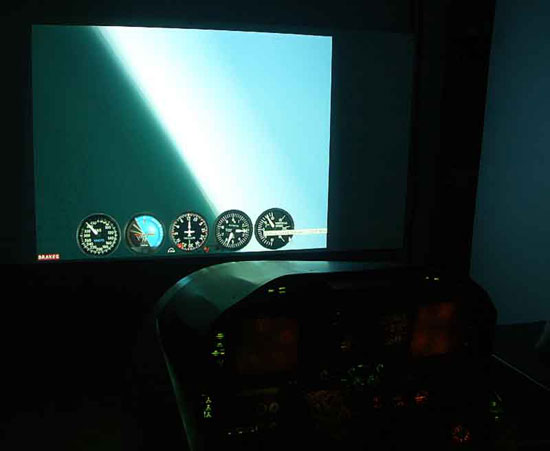