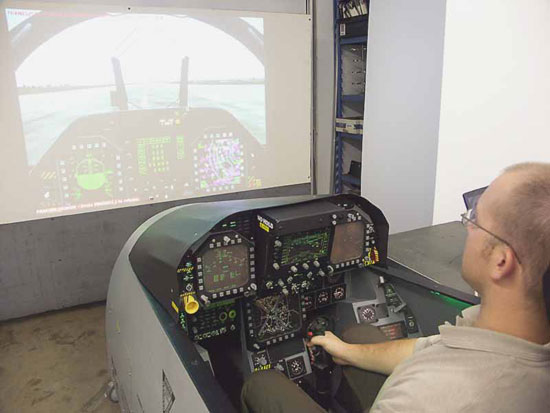 So, you ask, how was it? Well, let me wipe the drool off of my notes. Words don’t describe it. I consult Roget’s Thesaurus. Nope, still no words. Beginning first with FS2004 and using the freeware F/A-18E, we took off from Fort Worth NAS/JRB and made the circuit over the city and headed east for Dallas/Fort Worth International.

After clearance from the tower was granted, I entered the pattern and something really odd happened. The hair on the back of my neck stood up, I got chills on my arms and my palms were running like faucets. My breath quickened and I could feel my heart pounding in my chest and hear it in my ears. I’m sure Miller was coaching as an instructor, but I couldn’t hear a word he said. Every ounce of concentration was focused on the projected display before me. After entering final, I was literally holding my breath until my rear wheels touched down. Hearing the chirp of the tires, I realized I nailed my first landing on one of D/FW’s unusually idle runways. I kept looking for the three-car pileup blocking Airport Freeway, but I didn’t see it. 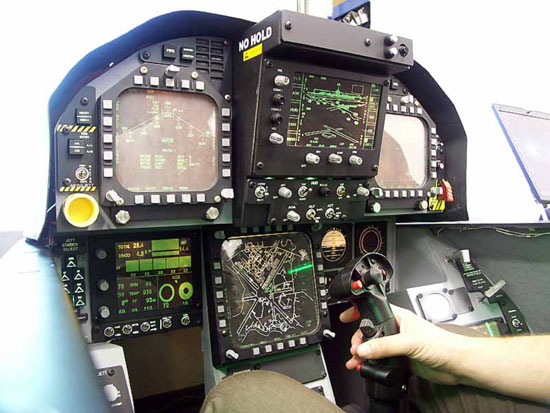 Then the torture began. Seeing my obvious pleasure at having stuck my first landing, Miller ramped it up with a carrier landing. If I was sweating and having heart palpitations before, now I was nearing tachycardia. I actually made the first one and was prepared to call it a day, when he lengthened my approach. I slammed the next one into the flight hangar in the back of the ship. I did it again after fighting the plane for ten full minutes. Then it got worse. Miller shut off the lights and put me in a night trap in the middle of a thunderstorm at sea. This bordered on cruel and unusual punishment. After flying into the sea twice and experiencing more than a smidgen of stark terror, we switched to the Graphsim title. Miller is a Hornet: Korea fan from back in the 3dfx days. He even has the original bound manual printed in 1998 lying on his desk. We practiced more takeoffs and landings again, both on land and on the carrier. Then he started a combat mission, and I managed to obliterate my target but ended the mission with a spectacular bolter pass on the carrier and flew it into the water.

All the time, though, instead of handling a keyboard for individual commands I was flipping actual switches in a cockpit and watching my aircraft respond accordingly. The feeling of actually managing the aircraft in-flight took two titles that I’d flown into boredom on my home PC and gave them life that no store-bought HOTAS setup ever could.

Then it was time for lunch. Over a brisket plate at Mark Dean’s Barbeque on Jacksboro Highway, we got a little peek into the life of a man who has made the construction of simulation cockpits his passion and his life’s work. Paul Miller is the son of two researchers who spent the first four years of his life in Italy, studying a village that survived solely on the bartering system. Any currency you might be carrying would have been useless, but it brought him up with notion that family and community comes first. Since that time, he’s pretty much dedicated his life to full-blown simulation cockpits. Anyone remember the Terminal Reality Fly! Cessna that made the rounds at every CompUSA in the nation? That was Miller’s creation, salvaged from a wrecked Cessna bought from an aviation salvage firm in Dallas. He’s made everything from a Citation 5 (salvaged from another wreck) to an F-15E Strike Eagle. He owned and operated Desktop Simulations, a private company whose bread and butter was racing simulation cockpits that found their way to every racetrack in the continental US. This funded his less profitable venture into aviation cockpits, one of which was an F/A-18E delivered to the naval air station at Pax River. He knocked off $5,000 from his original asking price for one request:

“Give me and my guys four hours in the F-18F Dome Simulator.”

His request was granted and what follows was hilarious. While one of his crew was operating the front seat, he was in the back. Curious, he began to play with the fully functional MFDs. In his headset, he could hear the guys in the control room high above his head in the 40-foot dome whisper, “I don’t think he knows what he’s doing.”That was until Miller pulled up a weapons page. The session came to a screeching halt, followed by the furious pounding of feet as the operators sprinted to the now thoroughly befuddled men in the cockpit. “We had no idea you were going to do that. Please don’t use that for anything other than navigation, okay?” the Navy technician gasped, out of breath. Miller replied:

After losing the company he founded in a personal conflict with his board of directors (a gross over-simplification of actual events), he was hired by B.J. Clark to do pretty much what he’d been doing on his own, as well as sell precision-fabricated parts to anyone else that might need them. This has resulted in Miller’s vision. To make low-cost simulation-grade cockpits available to the services for a fraction of what they pay for one now, enabling more pilots to get more training time, linking them up via networks so that literally, every pilot can train with not only fellow aviators in his own air force, but thanks to diplomacy and coalition-building, aviators from other nations using US equipment.

Returning from lunch, we briefly met with Mr. Clark again. This time, he had enough time to offer some sage advice:

We returned to the demo room and logged a few more flights, this time my photographer was at the controls. Miller gave him a pretty good flight school and was a patient instructor as he had Bob put the Hornet through its paces. After managing a successful landing, we met back up at Paul’s office to conclude the interview.