There is an almost infinite amount of screen resolution sizes that you can select. Initially I was running at 1280 x 1024 but soon realized there was an advantage to running 1024 x 768. Settings such as “World Detail Distance” and “Number of Objects” and “Number of Roads” have direct ramifications on program performance, so experiment liberally with those settings to find out what your hardware can handle. Video RAM is your friend with X-Plane so come armed with a lot or be prepared to dial back the eye-candy.

Once you have your visuals and performance sorted out take some time to set-up your controller(s). This is time well spent since it is integral to making your X-Plane experience a good one. X-Plane makes it a snap to set-up your peripherals with an easy to understand menu that allows you to move the control axis or press a button on your controller and set whatever sim function you desire to that axis or button. I used a CH FlightSim Yoke and CH Pro Pedals for my flying and can recommend them highly. With integrated throttle, prop, mixture and toe brakes on the rudder pedals, the CH kit is the way to go! For aircraft requiring a stick instead of a yoke, I used my trusty Saitek X45.

With the program and controllers properly set-up, it’s time to go flying! X-Plane ships with around 30 included aircraft that vary in quality from very good to not so good. My favorite default aircraft to fly is probably the V-22 Osprey, which is a blast because it is so tricky to control. 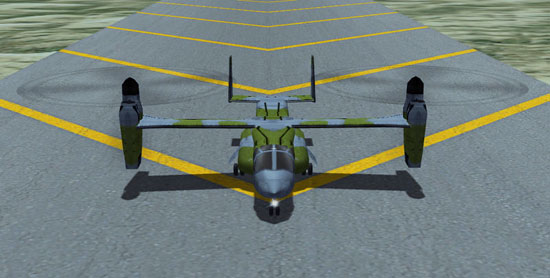 A sampling of the other included aircraft include: the Boeing 747, F-4 Phantom, F-22 Raptor, King Air B200, Boeing B-52, Douglas KC-10, Bell 47, B-2 Spirit, B-1 Lancer, Bombardier CL-415, and the X-30. That isn’t all of the included aircraft, but you can see the sim covers the range from civilian to military, heavy jets to float-planes, helicopters, airships, and spaceships. While some of the included aircraft are very well done, some either don’t fly very well or don’t look very good, or a combination of both. Where X-Plane really shines though, is its huge fan base, which is turning out new airplanes, scenery and utilities every day. Most are freely downloadable while some are payware. Some of the free aircraft appear to be just as good as the pay aircraft, but there are also some very good and talented people earning a few dimes off of their creations (good for them!). Since X-Plane ships with a module (called Plane Maker) that allows anyone to build their own aircraft, you also can see some pretty questionable designs and flight models out there. Try them out and use your own judgment. Many of the aircraft I’ll be using in this review will be free downloadable add-on aircraft. A great source for all things X-Plane whether it be downloads, forums or even ordering your own copy of X-Plane, is the great community over at X-Plane.org.

The first plane I hopped into was the default King Air B200. Since I fly one for a living, I had to start out with what I know. I have to admit to being spoiled by the Aeroworx B200 for FS9 so I didn’t intend to spend much time in something I knew wouldn’t compare. While graphically the B200 doesn’t hold a candle to the Aeroworx model, the flight model is a fairly good representation of the B200. I would generally consider it to be a good training aircraft for any multi-engine operations, and training is where X-Plane really excels. 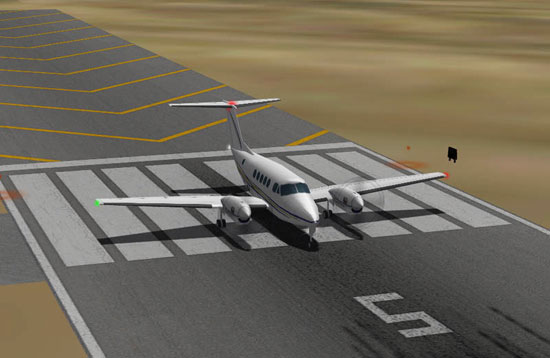 If I have one complaint about the Microsoft flight sim series, it is that they have a rather “sterile” feel to them. The MSFS flight model don’t really translate the subtle nuances of flight very well, the small corrections and inputs required, the very dynamic feel of flying a complex machine. Where Microsoft has dropped the ball, X-Plane has picked it up and run. Once you start moving in an X-Plane aircraft, you have to start flying it from engine start to setting the parking brake at the other end. The flight modeling seems so much more accurate and realistic, particularly in regards to environmental effects such as turbulence and crosswinds. Though I still hold a Certified Flight Instructor – Instrument certificate I’m not a practicing CFII anymore. If I were however, X-Plane would be a large part of my ground instruction curriculum. It is THAT good.

X-Plane (with a proper controller setup) is a perfect flight trainer as well as a flight simulator. A student could rapidly learn the relationship between power, elevators, rudder and trim. It doesn’t stop with primary students either. I found myself flying multiple instrument approaches to minimums and practicing emergency procedures that left my shoulders tense and a real feeling that I had gained some proficiency.