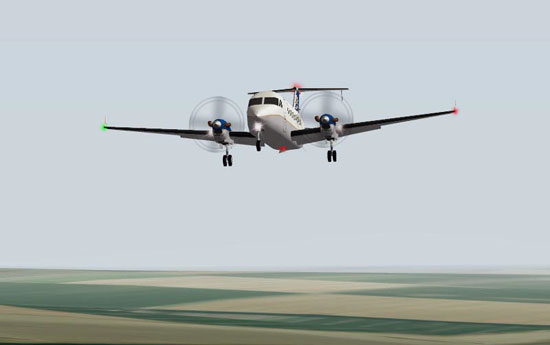 Retarding the throttles over the numbers I ease the plane onto the runway while my feet dance a bit on the rudders. The feel of both flight and ground handling in X-Plane really is superior and constant attention must be paid to the aircraft to keep it tracking down the center-line. With a little bit of crosswind landings become as challenging as they are in real life.

Going to the “Instructors Panel” gives an overhead view of the departure, holding, and approach that I just flew. As you can see, my entry into the hold left a bit to be desired, with a slight overshoot into the non-protected side of the hold. The two subsequent holding circuits were much better, as is usually the case once the first pattern is completed and any correction factors are added in. The vertical profile is also included below the map, showing me a little late responding to the glideslope, but immediately correcting and flying an “on and on” approach all the way down. You can see the value of the chart plotting in evaluating instrument approaches or even VFR maneuvers such as turns around a point, box patterns and S-turns across a road.

Using the “free-cam” I can also move the camera view independently from the aircraft to look at terrain, objects, or in this case, the 3D flight path recording of my holding pattern. The nice thing is all of this data is recorded at all times and you can toggle it on and off at any time either during or after you’ve completed the maneuver or approach. This vertical profile is slightly different than the one I used during take-off in that this has a continuously shaded height profile instead of lines depicting the height. Seeing the hold superimposed over the terrain is a nice feature.

While shooting instrument approaches is useful and great practice, I get enough regular practice at work on those to keep proficient. What everyone can find useful though, is practicing emergency procedures. X-Plane allows for many different types of failures including: power-plant, instruments, flight control, hydraulic, electrical, gauges, and many more. One of the most dangerous failures that can occur in a multi-engine aircraft is an engine failure at or around rotation speed. We refer to these as V1 cuts and each year we go to Citation training at SimuFlite in Dallas to practice those and other emergencies and procedures in a full motion simulator. Our King Air B200 training is done in-house however, so we actually fly the aircraft on our checkrides instead of using a simulator. We can’t do true V1 cuts in the actual airplane, it would be far too dangerous, but X-Plane will allow me to practice them at home with the failure occurring at the most critical time.Failures can be set via a general reliability percentage, where failures are random, or you can set specific values for each failure. In this case, I’ve set the left engine to fail at 105 knots and the right engine to catch on fire at 3000 feet. Obviously, I know when these failures are going to occur, so I’ll be ready for them, but imagine setting these factors for your student without them knowing, and sitting back and watching the fun!