20mm: I want to go through the Phantom project with you in more detail in just a moment. But first, I understand you had an opportunity to meet a personal hero of yours and I’m sure a hero of military aviation fans, and Phantom enthusiasts everywhere, General Robin Olds. Tell us about that.

Ben G: Absolutely. It was a great opportunity to meet one of my favorite fighter pilot aces. Robin Olds was a fighter combat ace with 16 kills, 12 in World War II and 4 in Viet Nam,. He was the mastermind of Operation Bolo in the Viet Nam War.

I was at a Phantom Convention, when I saw a picture of Robin Olds sitting in his F-4 with his camo flight helmet on and strapped in. I was talking about his helmet with another person and was wondering what type of aircraft he had painted on the side of that helmet when the General walked up behind me and said, “Boys, those were MiGs.” 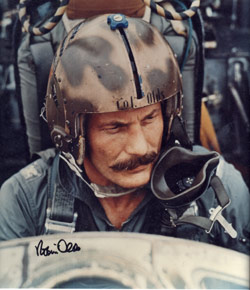 That’s how I met him, by surprise. I asked him about the camo helmet scheme and who decided to paint them. He said he had decided that a camo paint made the pilot safer from the North Vietnamese guns: If the pilot had to eject over hostile territory he did not stick out like a white target. He told me about a time his base was visited by a full bird Colonel, unannounced. Robin was the Wing Commander and that started his irritation with the Colonel, which got worse when he said he wanted the flight helmets painted back to regulation white. Robin wasn’t about to take any crap from this Colonel. He told the Colonel that if he would like to suit up in full flight gear with a white helmet on he would be glad to have him dropped by helicopter behind enemy lines but he had no plans on changing his helmet or the rest of the 433 TACFG. After the Colonel embarrassed one of the Thai bartenders at the base, Robin told the Colonel to get the hell off his base and if he wanted to come back he had better let him know first.

He was really generous with his time, so I was able to talk about flying the F4 in combat. I asked him his thoughts on the use of the Vulcan gun pod. He said he didn’t use it and didn’t allow it to be used by other pilots in the Wolfpack group. The reason was that the pilots didn’t get any formal training in gunnery school and he thought it was too dangerous because pilots would tend to stray off to perform ground strafings and aircraft were lost just from that. He was much more of a believer in missile shots, although the Sidewinder at that time was not nearly as accurate as it is today.

Before we parted company, I got him to sign a picture of my F4. He thought it was great, but he asked me, “Where’s the rest of it?” I told him, “General, that’s all they would let me have!”. We both got a good laugh over that. It was really an honor and privilege meeting him. 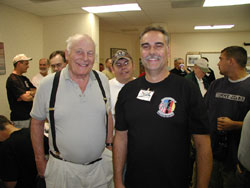 20mm: Great stories, meeting up with Robin Olds, one of the most famous Phantom drivers around. Let’s talk some more about the F4. Did you have any deadlines for completion of this project?

Ben G: Well, not per se, but as things progressed, I could see that aiming for a patriotic event this Fourth of July 2005 would be possible.

PSA: PC Aviator 4th of July Sale 50% Off All the Things

Reborn on the Fourth of July Page 2

Reborn on the Fourth of July Page 4

Reborn on the Fourth of July Page 5