The way the TIR works in BoB II is how it should work in all games and my advice to developers looking to implement 6DOF support is to pick up this game and see how the game works in cockpit. This view of my prey through the stuka’s dive bombing window is courtesy of the 6DOF function of the TIR. 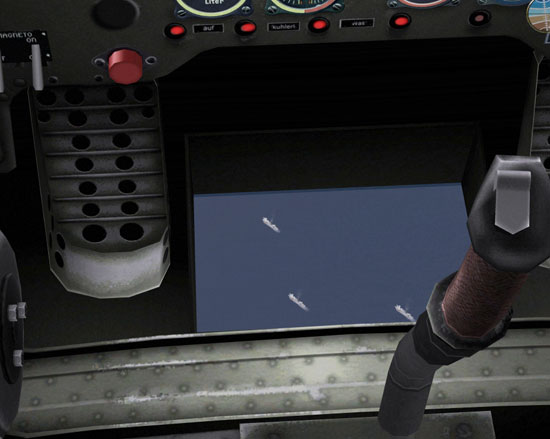 The game will ship with the traditional single player missions and the full blown dynamic campaign. In general these appear unchanged from the originals. This is actually a pretty good thing since the single missions were well done and deep enough to repeatedly entertain and the campaign is a masterpiece all by itself.

For those that are unfamiliar with the Battle of Britain mission and campaign setup I will briefly describe it. Single missions in Battle of Britain range in type from training, advanced training, intercept, fighter vs. fighter and historic missions that occurred during the battle. In general most of these missions can be modified to have different areas of fighting; aircraft from both sides can be selected and in some cases changed. You can fly one mission as a spitfire pilot and then refly the mission again as a Luftwaffe flier.

The numbers of total aircraft that are rendered at one time is probably rivaled only by European Air War; the king daddy of large formation creation. Battle of Britain wasn’t far behind, rendering large formations of bombers along with their escorts and opposition fighters. Battle of Britain II continues this tradition and budding British aces will be impressed, and intimidated, by the vast number of bombers that appear before them.

There were compromises taken when the first game came out and it looks like some of those haven’t changed. The biggest one involved the AI behavior in formation, particularly when aircraft were damaged. In the first game damaged bombers essentially stayed in formation, a compromise designed to allow for larger formations without the slowdown of trying to follow each individual aircraft in that formation. Unfortunately it made for some unsatisfying gameplay. The Spits and Hurris both fired .303 rifle caliber ammunition and it took a lot of it to bring down a bomber. In the game a person could empty his guns into a buff only to see it fly away harmlessly, even if it was trailing smoke. There were no stragglers to go after, an immersion buster.

There were some fixes with upcoming unofficial patches to the game. I could be wrong (and I will find out if I am) but I don’t see stragglers in the games that I have flown. It appears that the problem that originally showed its head, damaged planes flying on in formation, is still here with BoB II. This isn’t a show killer for sure but I really wish it could have been changed for this version.

Update: Apparently bomber stragglers do occur. Bader says this feature is still in BOBII. Thanks for the clarification. 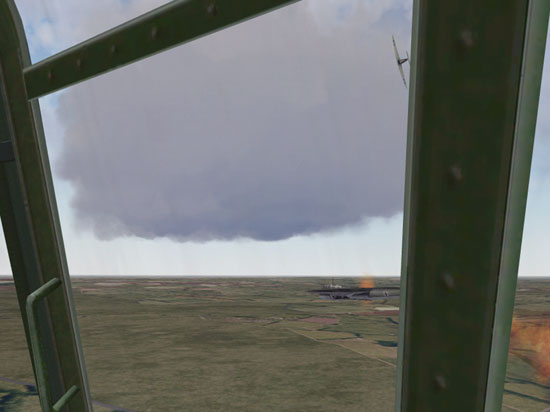 The campaign takes the player from the realm of flight simulation and into the world of wargamer. British players have to decide when to scramble flights and which enemy bomber formations to attack. Fatigue and morale are just as important as airframes and pilots in the defense of the isles. If you send your pilots after every feint or if you attack over the channel too soon you may find you are out of healthy pilots and planes at a critical point. Likewise if you try to rest your crews they might be wiped out in an air attack on your aerodrome. 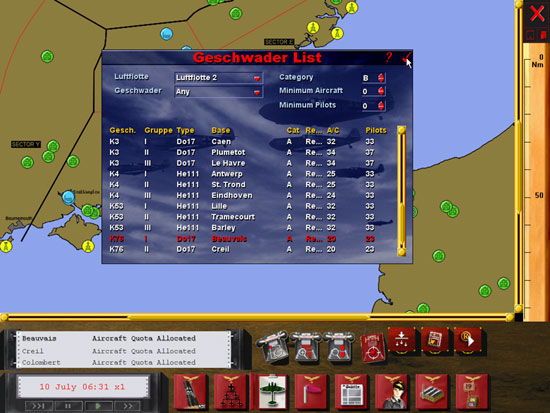 The Luftwaffe commander has his or her own set of issues to deal with. Should you go after the airfields and try to decimate the British fighter units or should you go after industry and knock out the ability of the RAF to re-equip? Should you continue to send your Stuka units into battle or should they be pulled out. The JU 87 units that flew in the real battle were decimated by the RAF and were never used in force on the western front again. Do you place your fighter units high over your bombers, where they can have better success against enemy fighters? Or do you place them in close support where they can cover the bombers, but are at a disadvantage against the enemy Spitfires.

All these decisions are made on a map that represents the original map used by the British during the war. The aircraft groups are represented on the map with the original style icons used during the war. Anyone who has seen some of the old RAF maprooms will get a feel for this. Again, this is essentially unchanged from the original game. That is a good thing too. 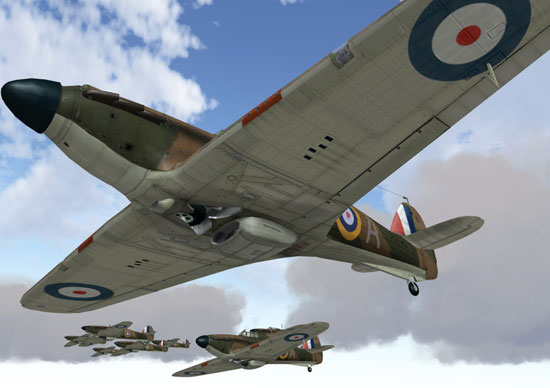 So far this seems like a pretty tasteful redo of a near classic game and it is. Most of you know that I have to have something to complain about in any write-up I make and of course there is no exception in Battle of Britain II.

Disappointingly there will be no multiplayer with this version of the game. I knew this when I talked to Scott at E3 but I was still holding out hope that maybe something could be done to at least have something. For those that remember the MP capabilities of the first game were probably the weakest part of the game and it was decided early on that trying to correct these problems would take the team too much time and would take too much away from other parts that could be corrected.

I respect that decision although I don’t like it much. I do understand that with a limited time and budget there are things that have to be shelved. At the same time I also understand that any game that ships without a multiplayer element will be at a serious disadvantage. The worst part about all this is that a game like Battle of Britain II could make for an outstanding multiplayer experience.

Games like IL2/PF, Falcon 4.0 and RBII/IIId have thrived beyond their normal shelf life due to the multiplayer following that they have garnered. The idea of fighting over the campaign map, with up to 64 players playing as Brits and Germans would be intriguing and I could see all kinds of dynamic campaigns bringing people in to fight for the life of the empire. Alas it isn’t meant to be and I fear the lack of multiplayer capability will inhibit some people from purchasing the game.