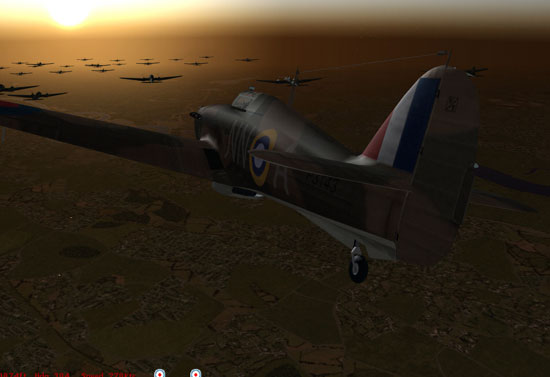 Overall the preview copy (a late beta version) brings exactly what I expected. I have to admit there was little that surprised me since I played the game about two hours at E3 and I am an old hand at Battle of Britain. Former players of the game will ease right into the game with few problems.

It has been asked on the boards, ‘Why do we need to get this game when bdg .99 is out?’ That is a very good question and one that I cannot answer easily. Do you need this game? Probably not, BDG works fine and fixes a lot of the problems that the original title had, to include some of the quirkiness found in the release title. Still, to consider this to just be another patch to the original game is to underestimate the improvement that the Shockwave crew has brought to Battle of Britain II.

Ultimately this is something of a gold type release IMHO. It updates a lot on the original game, brings it more up to 2003-early 2004 standards graphically and gameplay wise but doesn’t significantly change the original title. If this was some run of the mill title or a game that had marginal appeal in the first place then I would probably not look as forward to it as I do this release.

This isn’t a marginal title to start out with though. Just like Falcon 4.0 was a game that reached for more than it could handle Battle of Britain had the same problems. Lead Pursuit’s corrections and re-release of the venerable series has resurrected the title, although like Battle of Britain it never fully went away.

Will BoB II do for Rowan’s classic what Lead Pursuit’s F4:AF did for the old Microprose title? Time will only tell. In some ways BoB II was a better platform to try this resurrection on that Falcon was, in other ways Falcon surpasses this game.