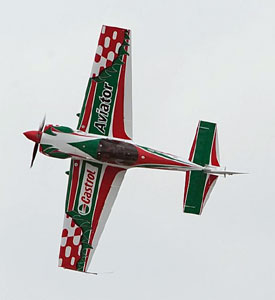 Given his vast experience and success in competitive flying, I asked Goulian if there are different mental approaches to airshow flying and competition flying. He noted that there can be differences, but that he has always tried to emphasize the precise approach required in competition flying in his airshow. For example, in competition aerobatics, it is crucial that pilots achieve precisely 90 degree nose up or down during vertical maneuvers and that rolls be stopped precisely wings level without any wobbles. It may seem a minor point to the untrained eye watching from the crowd, but this level of precision is something Goulian says he strives for.

Of course, Goulian’s otherworldly level of precision is developed only through constant practice. This pays dividends in the form of confidence –– an element of aerobatic flying that Goulian regards as crucial. “You have to have that confidence level to fly aerobatics –– faith in yourself, faith in the machine….” Goulian gave me an example of the level of synergy that must exist between the man and his machine. “During my show today, I thought I had a problem with the elevator, but it turns out that my elevator trim was just a tick off of where I normally set it. It was a really minor thing, but I fly using the exact same amount of stick pressure every time I fly, so when it was just slightly off of what it is normally, I noticed it immediately.”

While extended discussions of aircraft performance limits may be the staple of any airshow conversation, Goulian thinks that the airshow community occasionally loses sight of the most important part of the airshow –– the pilot. “I think it’s important to emphasize the person in the cockpit. Sometimes in this business we get too focused on performance and horsepower and we forget about the person in the aircraft and all of the other professionals, from the maintenance people, to the people in the tower.” It was clear just how important it is to Goulian that his airshow flying calls attention to the work of all aviation professionals. His point is well taken, indeed, given that were it not for the wide variety of dedicated men and women flying and supporting these aircraft, they would be nothing more than expensive sculptures of wood, fabric, metal, and carbon fiber.

Goulian’s appreciation of and respect for the importance of the human element in aviation is pervasive, especially when it comes to how he flies his show. He said he is constantly striving to change his show and keep it fresh for the audience. “When I fly, I have a vision in my head of what I want the audience to see. I wasn’t a great airshow pilot until I started to really picture my airshow from the audience’s perspective.” I asked him to compare himself to another esteemed airshow aerobatic performer, Sean D. Tucker. He told me that because his airshow style is very much based on the precise manner of competition flying, his show tends to emphasize sharp lines, whereas Tucker’s show tends to be “more flowing.” Two brilliant airshow performers, two very different flying styles.

I asked him if there are any maneuvers he especially enjoys flying. “Really, the entire show is a lot of fun to fly,” but he did note that the tumbling gyroscopic maneuvers are particularly challenging, especially when it comes to that crucial element of confidence. “You really have to have that confidence level when you do tumbling maneuvers, because if you are set up to do a tumble with two turns, there is no way to stop the plane after one. Once you start the tumbling maneuver, the plane is on its own.” He stated that even after only three days away from flying the CAP 232, it takes some time to return to that level of confidence necessary to fly the aircraft on the limit.

Sharing a passion with Goulian for Formula One racing, I asked him if he sees any similarities between auto racing and aerobatic flying. “I’ve done the Skip Barber racing school three times and when you get technical about driving the car, from the standpoint of braking zones and apexes, you see how the challenge for race drivers is similar. We are both striving for perfection.” I asked him if he felt that airshow pilots, like race car drivers, tend to be driven, “Type-A” personalities, as is the common assumption. After some thought, his answer was interesting. “I am trying to think of all the really hard charging personalities in airshow flying, and the interesting thing is, they are all solo acts!” He noted that team or formation pilots tend to be more laid back. I asked him why he thought that might be the case. “Well, with a solo act like mine, when I’m up there, I am in control.”

If Goulian’s drive for perfection in the skies is overshadowed, it is only by his humble, approachable, and engaging personality. High performance machine-based sports like aerobatic flying and race driving tend to have their fair share of egos and cool, remote personalities, but Michael Goulian defies these stereotypes. While a brief glimpse of his airshow performance will confirm his world class skill at the controls of a competition aerobatic aircraft, Goulian appears to be as concerned with putting a human face on aviation –– a world too often obscured by technology. After all, one can be impressed by high performance machinery, but one only becomes truly inspired by the person controlling it. After our brief conversation, I can honestly say that Michael Goulian is a remarkable airshow pilot, but a truly inspiring human being.

My sincere thanks to Mr. Michael Goulian for graciously accommodating me on short notice for this interview and to Senior Airman Danyael Clark and First Lieutenant Cathleen Snow of the 911th Airlift Wing Public Affairs Office for putting it together.

On a personal note, I would also like to dedicate this interview to the memory of Jimmy Franklin and Bobby Younkin, two brilliant and inspiring airshow performers who left us far too soon. They will be sorely missed. 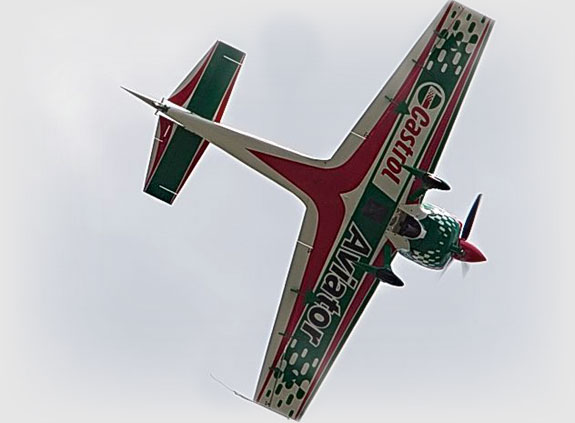