If you are flying for the other side, you can now also fly the Mi-24 Hind (although it doesn’t have a Hind cockpit). Moje (responsible for making the additional helicopters flyable) has made custom loading screens for the Mi-24 (and Ka-50, Blackhawk and Hokum). I don’t know about you, but that forward air base looks like a juicy MLRS target!

Other new campaign maps such as Alaska and the Aleutian Islands feature interesting new maps and beautiful new aircraft and vehicle camouflages.

I can’t say enough about how talented and innovative the terrain modders are. The relatively bland terrain has been significantly spruced up. To date, Rocky has given his retexturing treatment to three of the theaters (Georgia, Taiwan, and Lebanon) with more to follow. His special techniques have really added to the feeling of low level flight in EECH.

Rocky and Gotcha have also found a way to soften up the textures that comprise the top of the forest layer which gives a much more three dimensional feel and gives the impression of an actual canopy. Further work with trees is being explored by Craigmire with promising results.

Rocky has even given the water texture a nice update giving a much better feel for altitude, speed, and depth perception at low level over the oceans. 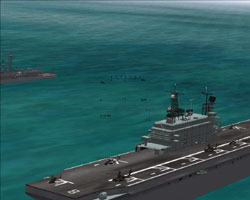 Vehicle and aircraft skins look super. It is hard to believe that this sim is over five years old when you see how good looking the original 3D objects are. With the new skins and textures this sim holds its own against many of the newest sims released today.

With the high LOD turned on and the CBAR (City Block Approximation Range, a value in meters) set to a high value (2000+) the theaters seem particularly dense in urban areas. The possibilities for ambush, cover and concealment, and difficult urban fighting are endless. Be cautious with the CBAR setting however, at high enough values your frame rates will start to tank no matter how good your system is.

Another outstanding new effect is the addition of the rotor downwash effect. At low level your rotor will kick up dust clouds of varying intensity based on your altitude and the type of terrain you are flying over. In some theaters the blowing sand and dust effect is more pronounced than others.

For those of us (like me) who enjoy great external views of the action while playing, the modders have added an excellent set of keystrokes to alter the field of view (keys 7/8/9). I particularly like the narrow field of view which acts as a zoom lens and brings objects in the background much closer. Here are the three “steps” of the FOV, the setting for each of these can be set in the eech.ini file.

The narrow FOV view is also useful from inside the cockpit when using the cannon with TrackIR to engage distant targets that you haven’t locked up. The magnified view allows you to easily pick out where your cannon shells are hitting. 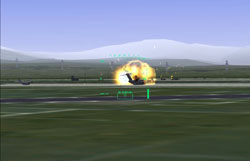 Another useful new feature is the ability to use the “Campaign Commander” to generate quick missions on the fly. If you see an important target that the campaign engine hasn’t recognized and “fragged” you can click on the target on the campaign map and the computer will immediately assign a mission to strike the target. For instance here I’ve clicked on the enemy anti-air unit and the campaign immediately schedules a SEAD flight to take it out. 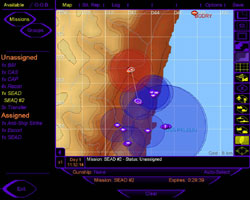