Obviously you can see that the modifications to EECH are more than skin deep. It is easy to show off the new terrains, skins, and other visible features, but demonstrating the changes to the enemy aggressiveness and revamped campaigns is more difficult. Many of the tweaks and improvements the modders have done lie beneath the surface and are no less important and impressive just because we can’t take screenshots of them.

I’ve touched on some of the great new features of the most recent iteration of EECH but there are many, many new features that I haven’t mentioned. The improvements go far beyond the scope of this article. You might be thinking to yourself “yes, that’s fine and great, but WHY would I want to reinstall a five year old sim?” Let me refresh your memory with a bit of a re-review of the new and improved EECH!

The Enemy Engaged series (EEAH and EECH hereafter referred to solely as EECH) has always been well ahead of its time. Combining awesome high resolution graphics with the immersion of a real time dynamic campaign, EECH rivals Falcon 4 in terms of the feeling of being involved in a large campaign, granted at a less complex level.

“The Falcon campaign is grognard level: ground forces engaging, pulling back, holding for resupply, guarding positions, retreating. Factories are responsible for resupply so damaging the industrial base has serious effect. Taking out bridges will slow or prevent the movement of units. Holding on the tarmac, waiting to taxi, you can feel quite small: SEAD flights landing, BARCAPs taking off, massive cargo movers arriving from Japan. You’re limited to a very particular role in all of this.

EECH was not designed to be that sort of wargame. Ground forces move on a node system (following roads) packaged as groups. You don’t see front lines or infantry combat. Ground forces work to slow you down (clearing approach avenues to the airfields or other target points) instead of moving on their own to seize targets. In effect it maximizes your importance on the battlefield. In Falcon the troops can fight fine on their own; in EECH you’re the only one who can win the campaign.”

With units scattered all across the map, EECH places you in the heat of the battle and rewards aggressive flying and attacks. With the ability to “freelance” and exceed basic mission requirements, you can greatly alter the path and ultimate outcome of the campaign. Squander your helicopter resources however, and you will likely be overwhelmed by enemy forces. What is really nice is that there are clearly defined and attainable campaign goals on which you can focus your efforts. Each campaign scenario has objectives to be met and graphs of force levels that will guide your decision making. 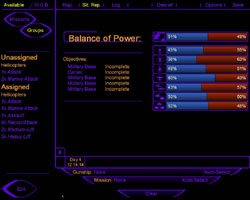 Whether you decide to go aggressively for the primary objectives or march across the campaign map waging a war of attrition, you are the general, the commander and the line pilot all rolled into one. Some of your forces will move about independent of your actions as they are commanded by the campaign artificial intelligence, but your actions will greatly affect the success or failure of your grand strategy. One feature that “guod” clued me in on was the ability to micro-manage the air war (if you chose to) by selecting any unit on the map and rearranging their waypoints to better suit the situation. As you are flying your mission and you spot a threat to an insertion mission flying another route, you can quickly change their route on the fly to prevent them from being shot down.

One very entertaining aspect that EECH shares with most other simulations that sport a dynamic campaign is the ability to just sit back and enjoy the action. From the main campaign mission planning map you can select any unit (ground or air) and ride along with them and witness their performance. Want to see how that heavy-lift insertion mission is going? Simply click on the unit and either watch the action in the mini-window or click “camera” to see the drama in full screen mode. 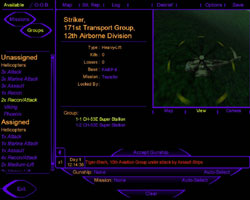 The Action Camera (F11) and Cinematic Camera (Shift-F11) are two of the most well implemented and endlessly fascinating external viewpoints ever put in a sim. The Action Camera shifts all over the theater covering all of the units in the theater and providing a dazzling look at what the rest of your allies and enemies are up to. The Cinematic Camera simply glides around the unit in focus providing movie-like shots with dramatic effect. A very powerful view menu system allows you to tailor the views to your particular interest. Want to view all of the allied, transport, C-130s in the theater? No problem! 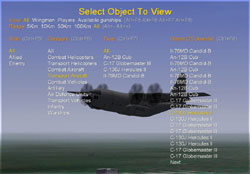 The view system is simply a screenshot lovers dream (me!) capturing all of the beauty and drama that this sim constantly pounds out. I’ve found myself captivated for many hours when I could be flying just letting the Action Camera take me around the theater.

Eavesdropping on the other units in the theater is a good way to observe the depth and logic of the campaign AI. While certainly not always perfect, the AI does an admirable job of waging war. Particularly devastating are the anti-aircraft units that will bring multi-barrel AAA and SAMs to bear upon detecting a hostile threat. It only takes a very brief exposure to these threats to suffer extreme damage or instant death.

You aren’t going it alone however, and friendly air assets are on standby to help you out in a pinch. Be careful about requesting air support though, since you could be sending your willing compatriots into a flak trap. Here a flight of Harriers takes on an exposed enemy unit that is lagging at a road intersection as a SAM zips by between the undoubtedly wide-eyed aviators!

Enemy forces won’t sit idly by and allow the balance of power to tilt in your favor. In response to your request for air support they will scramble their own response. I say “enemy” but since you can play for Red or Blue the term really is relative! As a helicopter unit, you are at a severe disadvantage against enemy fighters. While it is possible to shoot them down with Stingers or even your cannon, concealment is your friend and can spoil an enemy fighter attack until help arrives on the scene.