Since we are talking about AI, now is a good time to mention that wingman AI is actually quite good. Basic wingman commands such as “weapons hold”, “weapons free”, “attack my target” among others, are rapidly and aggressively interpreted by your wingmen. As with most sims, keeping wingmen on a short leash is the best way to utilize their capabilities and keep them alive. A particularly useful command is using the combination “hold position” and “bob-up” commands to orchestrate a coordinated attack on the enemy. Simply guide your wingman into position, give him the “hold position” command then fly off to your own concealed position. Once you have sent the “bob-up” command he will hold his hover, unmask, fire and re-mask. This is a very effective technique for taking out massed armor and other clustered targets since it divides the attention of the enemy defenses. Be very careful about issuing the “rejoin formation” command since your wingman will make a bee-line straight for you and could possibly expose himself (herself if you are Cat!) to enemy fire in his haste.

The battlefield is in constant motion with units moving, relocating, attacking and attempting to land troops and seize territory at all times. EECH features fast moving, constantly evolving campaigns that can occasionally catch you by surprise. Strategy is important and decisions have far reaching consequences. By leapfrogging across the campaign map you can seize enemy airfields and helicopter bases (FARPs) thus shortening your future flight times to rearm and refuel before getting back into the action. Here a flight of Blackhawks comes under fire while inserting troops into an enemy held FARP.

Seizing locations takes time and effort away from the main objectives however, so a balance must be struck while keeping an eye on your losses and enemy advances.

Heavy lift cargo aircraft will transport supplies and equipment to embattled positions and facilities and airbases can be repaired, so it isn’t enough to just destroy an airbase and continue on your way. Attention must be paid so that enemy forces don’t reconstitute and catch you sleeping. The best way to deprive the enemy of resupply is, of course, to destroy their means of accomplishing it. That presents a problem itself however since oftentimes enemy transports are buried well behind enemy lines at heavily defended airbases and catching them in the air can be a difficult trick. 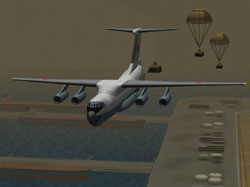 One of the unique things about the EECH campaign engine is that for the most part the units that exist in the theater are relatively permanent and they tend not to “spawn” in. Enemy aircraft takeoff from and return to bases, helicopters have bases, and enemy armor can be tracked (provided you have recent sightings) from location to location. That means if you can find the enemy, you can kill him and be assured that he is really gone. That said the campaign does have a way of keeping things interesting by constantly resupplying units by “generating” them. Your goal is twofold. First destroy the enemy faster than he can produce new units. Second, find and destroy the “generator” buildings that actually produce the units. I consider the “generator” buildings to simply be part of the campaign infrastructure. There are three basic types of unit “generator” buildings: aircraft, helicopter, and vehicle. In no time you will learn to recognize these structures and target them for destruction, thus putting a major crimp in the resupply capability of the enemy. As General Schwarzkopf so eloquently put it“We’re going to cut off the head. Then we’re going to kill it”. A little MLRS never hurt in accomplishing that goal! 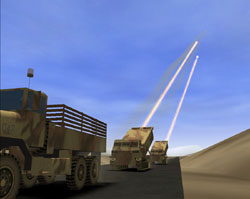 Don’t ignore those airbase hardened shelters and hangars either. If you zoom in on this hangar and take a peek through the window, you will indeed see that an F-16 lies sheltered within. Kill the building and you will kill what occupies it. 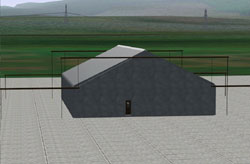 Much of how one happens to find themselves immersed in a simulated war has to do with how well the sim models “atmosphere”. By “atmosphere” I mean “mood” and “feel”, not the stuff your rotors are beating into submission. EECH excels in the “atmosphere” realm. The sun rises and falls and the lighting and shadow effects are simply second to none. Reflective surfaces on the 3D models give a true feeling of motion. Night flying is truly a frightening experience even with the aid of night vision equipment.

Weather also plays a very important role in EECH. Flying at night in the pouring rain is a tense and difficult task. The rain pounds on the outside of the airframe and smudges the windows reducing visual acuity. Windshield wipers on the helicopters so outfitted help a bit, but the onboard sensors also suffer serious degradation. The FLIR picture becomes a mess and you will often have closed to small arms range before you can pick out targets. The weather gradually changes over the course of the campaign, which only adds to the immersion. In my experience EECH may have the most realistic feeling weather and atmospheric effects of any sim past or present.