The avionics and systems modeling of all the included flyable helicopters (Apache, Havoc, Hokum & Comanche) are very good and believable. I’m no expert on combat helicopter weapons system though, so if you are a military helicopter pilot your opinion may vary. There are many different targeting modes, flight and navigation modes, stealth factors, and weapons employment profiles. It’s not my intent to teach how to fly EECH in this article, so I’ll spare you the details. As a big fan of the venerable Jane’s Longbow 2 I realize that comparisons will always be made between the two. I love both of them for different reasons, but EECH has simply grown much faster than LB2 and continues to evolve at a faster pace (although there appears to be movement on the LB2 modding front!). Here are some of the MFD pages for the Hokum and Comanche.

Of the original helicopters (it is possible now to fly ALL of the helicopters in the sim with the “fly all” mod) I prefer to fly the Apache most of all. As others have observed, the amount of cannon shells and the damage they inflict make the AH-64 one of the most deadly helicopters on the battlefield. Of course, the Hokum, with its side-by-side crew configuration is very unique and the ejection seats sure come in handy after making a poor tactical decision. Watching the crewmembers grab for the ejection handles then rocket out through the canopy is always fascinating.

The periscope view on the Hokum is another unique feature of that helicopter. 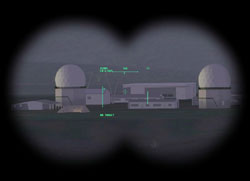 Flying the Apache in EECH is a rewarding (and destructive) proposition. With a more effective cannon and more ammunition to boot, the Apache is a workhorse in the EECH campaign. The importation of the Apache and Hokum cockpits into EECH from EEAH apparently wasn’t painless however. While both are fully functional, you do lose a bit of the detail and functioning instruments in some of the cockpits due to the scaling up from their native resolution of 640 x 480. For instance, the warning panel and analog gauges on the Havoc don’t function as they once did in EEAH. Here are the cockpits of the Apache and Hokum in EECH, both of which work very well with TrackIR.

The Apache cockpit from EEAH, fortunately, had multiple MFD screens to convey aircraft systems information so it is the more thorough of the two. The only drawback is that the MFDs in the original EEAH actually looked a bit better than the ones that now exist in EECH. Here are the AH-64 MFDs as they appear in EECH (left) and as they used to look in EEAH (right). You can see the graphics on the old displays are actually a bit finer than the ones we use in EECH.

What is most evident after just a few hours of playing EECH is the overwhelming attention to detail that Razorworks incorporated into the simulation. Everywhere you look there are jaw-dropping features that defy the fact that this is a five year old sim. Where other developers might have been tempted to cut corners the Razorworks team seems to have been a group of perfectionists. All one has to do is watch the gear retraction sequence on something like the Il-76 or the fact that the flight instrumentation in the cockpit is updated in real time from all external views to know that this sim offers something special. Armored vehicle hatches open and close. MLRS tubes are visibly emptied as the launchers fire their rockets. Aircraft taking off and landing extend their flaps. Ships extend, retract and rotate their anti-air missile racks on the decks. The HUD pitch ladder is even displayed and animated according to your pitch and roll in the pilot’s goggles!

Flight model characteristics may be a bit “sharper” than those of us that have flown LB2 might like. I chose to retain my suspension of disbelief by acknowledging that a next generation helicopter such as the Comanche might in fact be that responsive and easy to fly, but the topic is certainly open to debate. Things such as retreating blade stall and vortex ring are modeled and they will bite you if you let things get out of control. While I think there is room for improvement in the EECH flight models I feel they are quite good and flying the helicopters still provides plenty of challenge for those that are more used to fixed wing flying. That is one of the great aspects of rotor-wing combat flight sims: the necessity to fly the mission from start to finish without allowing your concentration to lapse. In fact, the flying portion can be just as deadly as the combat segment.