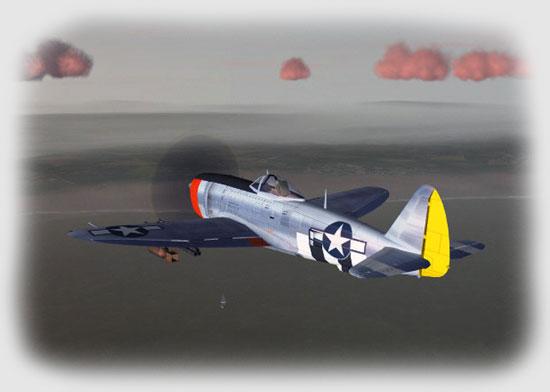 The Campaigns in the Aces Expansion

The game ships with five different campaigns that cover several theatres during the war; all of them replicating several real and fictitious battles that raged over the western theatre. Three of these are fought as allied powers and two are as the Luftwaffe forces.

The first two campaigns are a British and German campaign covering a semi fictitious 1941 Battle of Britain campaign. You have the opportunity to fly the Spitfire V or Bf 109F2/190A4 in the campaigns.

Ok, I am sure there are a lot of people already saying “There was no Battle of Britain in 1941” and yes, you are right but this is a fictitious one covering more or less a ‘what if’ campaign. While Germany never did seriously attempt to overwhelm the RAF over Britain the concept was a sound one and a nice fictitious campaign, where the Germans held off on invading Russia, pits the best the British had at the time vs. some of the latest Luftwaffe iron. 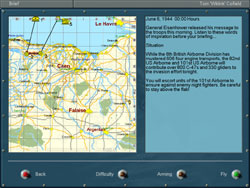 There are roughly 100 missions for each side in the game. Most British missions that I flew were typical for what you would fly when on the defensive against German forces. Most are bomber intercept missions or combat air patrols where you fly against a moderate amount of enemy bombers.

There are a smattering of other kinds of missions, one interesting one is flying a Gladiator on a ‘routine’ mission where you end up trying to shoot down a Fi 156 Storch with just the peashooters that came on the biplane. It has almost an old WW1 feel to it, attacking the slow observation plane with your fighter.

As the Germans you have a majority bomber escort missions with the freejagd and a smattering of airfield attack missions. This is pretty typical of what you would expect in such a game. The missions are with the famous (or infamous) JG26, known affectionately as the Abbeville Boys. These guys generally were considered the terror of the West Front and for a time were among only a few fighter JGs that faced the western Allied forces.

Another campaign (also roughly 100 missions) covers the US 56th Fighter Group and its support of D-Day Operations in the summer of 1944. While the 56th’s primary job in WW2 was to cover the 8th Air Force’s heavy bombers on their way to Germany; during the initial portions of the attack on the beaches of France all 8th AF assets were pressed to cover the beachheads. This is primarily what you will find in this campaign.

To be honest, I think the 56th is a bad choice of units to fly this kind of campaign. I didn’t fly every single mission in the campaign but the majority that I had time to play were generally ground attack or close air support missions. While the 56th did do their share of these missions and the aircraft they flew (P-47D25) was well suited to this role, the ground support mission in Western Europe fell more on the 9th Air Force and personally I think they should have been represented.

Zemke’s Wolfpack is a fine unit, certainly deserving of a campaign, but if I ran the zoo I would have picked something like the 368th Fighter Group, a P-47 unit that was with the 9th AF during the D-Day landings and the breakout later on. I know they don’t have the name recognition of the 56th but they would (to me at least) have been more appropriate.

Enough of that. It is kind of cool watching the Dakota’s drop their troops on the opening night. I don’t know if the 56th actually had escort duties during this time (I highly doubt they were used) but this is fantasy, not real life and it is cool to watch the AA open up and the searchlight click on as the C47s get closer to their targets.

The other two campaigns are smaller (around 60 missions) involve a fictional 1945/46 campaign where you are flying the HO229 against allied forces as the end of the Reich draws near. I only flew four or five missions in this one but the HO229 is some kind of aircraft and the missions were mostly bomber intercept, something that got me killed a whole lot.

The other is a 60ish mission campaign where you fly a Spit IX in support of D-Day. Many of these missions are similar to the ones flown with the 56th although there tend to be more escort and scouting missions than ground attack. Obviously the Spitfire isn’t the best ground attack aircraft although it was pressed into the role from time to time.