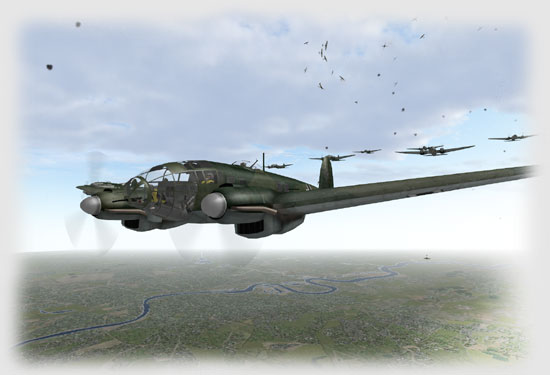 The strongest suit of the original game was the campaign. BoB was innovative in the way it brought wargaming and flight simulation into the same game. BoB2 didn’t mess with the winning formula.

Most people will start with the single missions and there are plenty of them. There are twenty five single player missions that ship with the game. Of these, nine of them are training missions. These missions include simple takeoffs and landings, follow the leader circuit training, and some landings with varying levels of damage or engine failure. Others are simple one vs. one missions, ground attack missions and bomber intercepts. The best missions are the ones that are based upon certain historic periods. Some of them are downright harrowing with hundreds of bombers and hundreds of fighters flinging themselves around the sky. These are among the best single missions that I have ever flown in any game and they never play out the same way twice.

Some people will probably think that 25 missions seem somewhat small but in reality the number is much higher. Every major parameter is configurable with the missions at hand so ultimately there can be well over 100 different kinds of missions. Aircraft, locations, times, altitudes, and even targets (in some cases) can be changed. In essence what you have is a quick mission builder disguised as single player missions. While not as wide open as say the quick mission builder in IL-2 you will find that you can play for hours without repeating yourself.

One thing that is missing, and I wish they could have gotten into the game, is a full blown mission builder. There is a trend of thought that the campaign is in reality a big mission builder and it is. It would be nice to be able to select different types of aircraft to fly specific missions against other aircraft. With the quick missions and the campaign it isn’t life or death critical but the chance to hand create missions would have been nice. 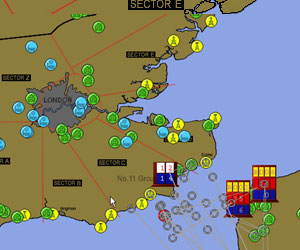 The key of the game of course is the campaign, which essentially is unchanged from the initial work of art created by Rowan years ago. Using a map that is based upon Fighter Command’s tactical map used during the conflict, players have the chance to actually wage war over the British countryside. In this regard BoB2: WOV is less of a simulation but more of a wargame.

Essentially you have the opportunity to play as either the British or the Germans — two different campaigns requiring very different approaches. As the British leader you must be much more reactionary while the German commander must be aggressive and hold the initiative during the entire campaign. The goals in the game are essentially the same as in the real conflict. The German commander must break the British ‘will to resist’ by eliminating the effectiveness of the RAF. To win as the Royal Air Force, you need to husband your forces ensuring that you keep enough reserves available.

This campaign setup has its positives and negatives. To a wargamer like myself it is absolutely fantastic. I personally think this is the best campaign ever used in any flight simulation. Falcon 4.0 comes very, very close but for me BoB (and BoB2:WOV) are the pinnacles in flight sim campaign structure. Absolutely nothing is scripted in the campaign. In fact, you and you alone decide when and where you want to engage the enemy.

What is negative about the campaign? Some people probably won’t like the inability to fly as a single flier in the conflict. It would be nice to have an AI campaign you could join in as a simple pilot during the battle but the campaign structure wasn’t designed to allow for this. So, in a way, the campaign will give some people a third person feeling that they won’t like. This limitation has been known for quite some time and anyone picking up the game should already have an understanding of what the campaign is like. If you are a wargamer and love simulations, you will love the campaign. If you have never gotten into wargames then you may or may not like the campaign.

One thing most simulation fans will like about the game is the flight models. Just like the first game the flight models appear to replicate the characteristics of the aircraft flown. In the game you get to fly the Spitfire I, Hurricane I, Bf109E4, Ju87B and the Bf 110C4. These were the standard aircraft flown by both sides in the actual battle. AI aircraft include the British Boulton-Paul Defiant (a short lived turreted fighter that was withdrawn from service after the Luftwaffe ate it for lunch) and the Blenheim medium bomber. The Luftwaffe has the JU88, He 111 and Do 17 as their bombers. In addition you have the option to gun the German bombers in the game.

The flight models are about as close as you are going to get with a computer game (at least for now). Torque effects are modeled very well although the effects on the ground are a little pronounced. This is partially due to a bug (with the original game not yet fixed by Shockwave) in which the landing gear is modeled as too narrow. This means takeoffs can be very difficult. I frankly think the takeoffs, and to a degree, the landings probably are too difficult in the game.