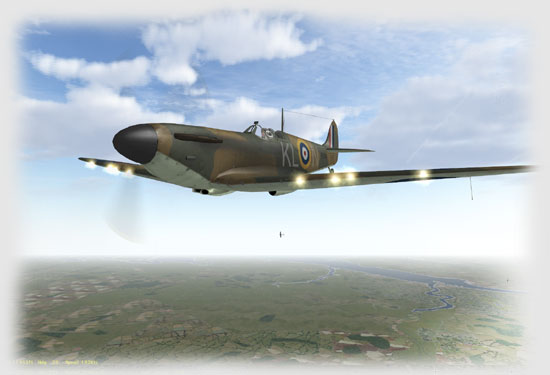 Like you would expect, the Hurricane and Spitfire each perform similarly, although the Spit obviously was the thoroughbred of the two horses. Flying the Spitfire in this game is a joy; the plane literally dances over the sky. It is fast, maneuverable, and a reasonably stable gun platform. The Hurricane is also more maneuverable than its German counterparts but didn’t perform quite as well meaning that you had better keep your eyes open when dealing with the German fighters. Stall and spin characteristics in both aircraft are fairly docile and while you can get into a flat spin with both aircraft, each seemed to break out of the spin with little difficulty. Test reports of the Spit said it had no vices and in this game it appears to be right on the money.

The Bf 109 is (and was) the premier fighter of the Luftwaffe in 1940 and in this game it is modeled fairly accurately. The plane is maybe a little bit faster than the Spitfire but they are so closely matched in top end speed that it really is an equal match-up. The 109 turn circle is much larger than the Spitfire so turning battles will be a loss for the German pilot. The 109 definitely climbs better than the Spit and the biggest advantage the real Bf 109 had is its fuel injection. The carbureted Spitfire (and Hurricane) couldn’t pull the same negative G maneuvers that the Bf 109 without the engine sputtering and stalling. So anytime you find a Spit or a Hurri on your tail, your best bet is to mash your joystick straight down to make your getaway.

The Bf 110 in the game is a semi-dog but can be deadly if flown properly. The real fighter was strapped with the escort role and it wasn’t fast enough or maneuverable enough to gain the advantage against the British fighters. In the game the plane accelerates poorly and is inferior as far as turn rate when compared to its RAF competition. It does dive well and has the most firepower of any aircraft in the game. If flown right it can be deadly but like the P-47 a few years later, it can be a deathtrap if someone attempts to dogfight in it. I have had some success with it but I have found the plane to be a somewhat unstable gun platform. I am not sure if this is accurate or not.

In general the characteristics of all the aircraft appear to be fairly close to accurate. They certainly are good enough to keep the sense of immersion in the game. Damage modeling appears to be fairly close to the stock Rowan version. Essentially the damage model is complete, meaning you can damage just about everything in the plane but it is not as exact as say IL-2. I find that often I sustain flap damage before anything else and the damage appears to be complete or not at all. I understand that cable damage does occur but it seems to happen with alarming frequency with the flaps. Viewable damage looks like it has been somewhat improved but it still is the generic shotgun blast style views you used to see in the old games. While fine for six or seven years ago it looks really dated at this point. I guess we have been spoiled by IL-2 because the damage graphics are almost laughable compared to what we see now.

The game does a lot of things in a realistic manner. Unlike other sims you have the option of going through a startup procedure with these aircraft. While the idea of setting magnetos and getting the right prop pitch may seem somewhat superfluous for some people the fact that in this game you can go through a somewhat realistic startup adds to the immersion. A lot of people probably will pass on this. In the campaigns I find myself rarely trying to take off anyway but it is nice to have this available.