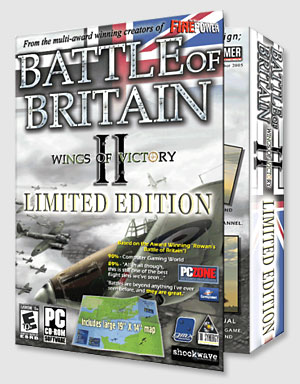 Battle of Britain II: Wings of Victory is probably the most realistic WW2 simulation ever produced. Other simulations have done a good job of representing the aircraft and equipment of the era, but BoB2 has gone beyond that and has created an interactive history lesson. There is no other game out there that comes close to recreating the actual historic feel of this game. BoB2 is by far the most accurate of all the simulations created to date. Other simulations may surpass BoB2 in the realm of graphics, flight model characteristics, or damage modeling, but Wings of Victory surpasses all other games in the authenticity of the actual battle.

This is a flawed title but an outstanding one nonetheless. While I admit there are some serious faults with the game, most notably with the crash bugs and lack of multiplayer, the accuracy and attention to what actually happened during this time are nothing short of a testimony to the men and women who fought and often died over the channel in 1940. At the same time the campaign structure is set up so that the game is rarely predictable; something even more amazing when looking through the prism of history.

I highly recommend the game. While I would have liked some things changed in the game, the overall update to the game is impressive and certainly brings the engine up to at least 2001 status, maybe later. Some people may complain about the terrain graphics, some about the damage graphics, some about the limits of the game engine but those that choose not to buy the game based upon these reasons will miss out on the most historically accurate WW2 simulation yet created.