Here we are climbing out toward the northwest with the flight director and autopilot on, in heading mode with an altitude of 24,000 selected for our cruise altitude.

The EFIS instruments and analogue gauges update very fluidly in the Flight1 PC-12 with no stuttering whatsoever. The cockpit does have a bit of a “computerized graphics” look to it. By that I mean the entire cockpit looks like it was developed in a high end computer graphics program and lacks the flaws and anomalies that a real cockpit typically exhibits. It is almost too clean. That said, I would prefer a slightly “CG” look to a crappy bitmap of a cockpit that has gauges misaligned and floating MFDs; Flight1 did a good job. The 3D cockpit is good. Again, not super high on the polys, but I like it. The switches, buttons, and controls are all clickable in the 3D pit. I rarely use the 3D pit in any airplane since the lighting, resolution, and gauge update rates just aren’t on par with a good 2D cockpit. Many people only want to fly from the 3D pit and I feel the Flight1 PC-12 is up to the task. 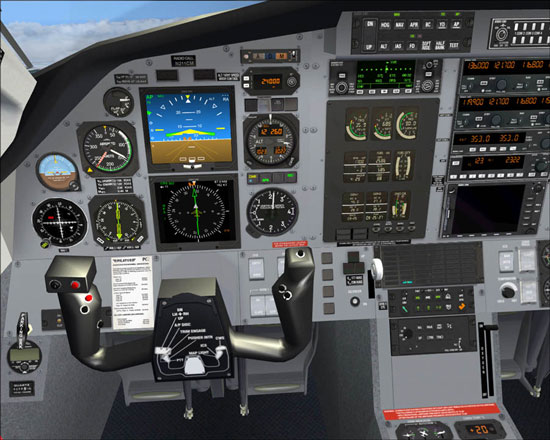 Reaching FL240 the PC-12 pushes over into level flight when a slight problem crops up. The PC-12 set up a short period oscillation above and below the target altitude. The period of the oscillations was about ten seconds and would have made real passengers sick in no time. Pausing the sim I hopped onto the Flight1 product forums and started searching for a solution which I found right away. It seems that altering the default passenger load-out (and thus the center of gravity) can cause the problem I experienced even though the CG was within limits. The solution is to not change the passenger weights or locations. I can see where some people might have grief with that but it didn’t affect my suspension of disbelief. I experimented with fuel loads and found that changing fuel did not result in any problems, which I feel is the more important than passenger and cargo loads.

After resetting the passenger load to the default positions and weights the oscillations disappeared and the plane flew fine for every flight thereafter. Level at FL240 I set the charted power for the conditions (28.5 TRQ) and settled in to check the performance figures. The charted numbers for the conditions indicated we should be seeing about 400 lbs/hr. fuel flow and 176 IAS and we were showing about 450 lbs/hr. and 183 IAS, pretty close and probably within the normal variations for any aircraft.

After crossing the Vancouver VOR we take up our course for Annette Island VOR. Entering the waypoints in the GPS is easy once you get familiar with the entry method and click spots. There are several pages for each mode that have a wealth of information.

With ActiveSky V (http://www.hifisim.com/) operating in the background while I use Flight Simulator I get treated to very realistic changes in weather as I head further northwest. ASV drastically changes the way clouds and weather are presented in FS2004 and after having flown with it for the past few months I can’t imagine going back to the default FS2004 weather generator. Weather is generated from individual stations and blended together seamlessly. As the terrain gets more and more rugged the clouds and fog fill some of the valleys while others remain clear.