Once you have entered the IP and hit the JOIN button a small satellite window should open and a bar will move across the window as the connection to the server is made. If you have successfully set up your router and ports this process should only take a few seconds. If your settings are incorrect the window will alert you that a connection was not able to be made and to check your ports and server IP address. It took several different router configuration tests before I was able to successfully connect. Once I had the process figured out, each subsequent connect attempt only took seconds. If you are having difficulty I would encourage you to attempt to hook up via telephone or voice comms (such as TeamSpeak or Ventrilo) to another experienced user who can help you with the setup. When Tom Cofield first attempted his connection we were able to point him at the router setup web site www.portforward.com and give him a couple tips, then he was soon connected.

Regarding the voice comms, we say TeamSpeak or Ventrilo because F4:AF doesn’t include an internal communications module (except for the type-in chat window). That’s a shame because the keyboard route just doesn’t get it while in the heat of battle. Voice comms are a “must” in F4:AF. Hopefully this will be one of the early additions Lead Pursuit makes available in their updates.

Once you have connected, you can open the MP CHAT box to type messages to other users that happen to be in the chat room at the same time. I would encourage the use of some form of voice chat software since it greatly eases both the setup of the connection and the setup of the game once you are connected. 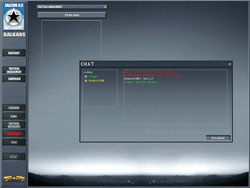 We concentrated on multiplayer cooperative missions with ground strikes because that puts more load on a sims multiplayer system than head-to-head air-to-air combat. The reason is, the sim needs to track more items with MP co-op ground pounders. We also spend most all of our time on F4:AFs Campaign mode.

Start a new campaign or if the server has a campaign started already, then simply go to the CAMPAIGN menu and after several seconds the campaign server name will appear in the top of the box. In our case, we named our TEs and campaigns “Gizmo”. In order to join the game select the name and then click COMMIT at the bottom right corner of the screen. 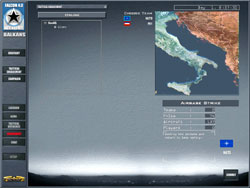 One thing worth mentioning is that when you click on the title of the named game that you wish to join, it should turn green then you can hit the COMMIT button. 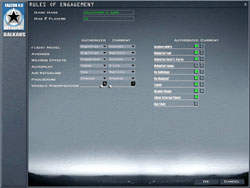 The variable ROE for different members is an outstanding feature that allows new F4 pilots to peacefully coexist with veteran pilots. During our testing we had no problems with some members using simplified settings (avionics) and labels while other participants used nearly full realism settings. We didn’t have any stability problems during our testing with mixing the two settings.

Once you have set the ROE click on OK and you will be taken to either the TE planning screen or the campaign planning screen where you can select a mission from the Air Tasking Order (ATO). In this instance Doug (Gizmo) and I (BeachAV8R) were flying on a 4-ship OCA strike. If you are playing with two online players and two AI players it makes sense to have the human players lead each element (flight positions #1 and #3) since each human player will then control their own wingman. 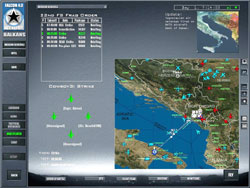