Formation takeoffs are a blast and maintaining position on another human player’s wing is a great challenge. In close proximity to other human players we noticed a tiny bit of warping. Occasionally a large warp would occur, for me this was always the result of me taking a screenshot. Predictably, I also seemed to suffer less warping at higher connections speeds than when I connected at 56K up/down.

If you happen to lose sight of your flight lead or wingmen a good means of determining their position is the EXP view on the Horizontal Situational Display (HSD). Your flight member’s positions are data-linked in blue showing their position, heading, flight position number and altitude (in tens of thousands of feet). 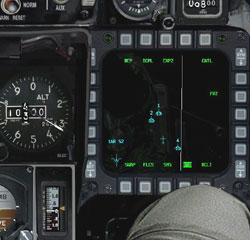 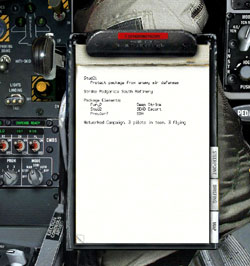 As is the case in single player mode, division of labor and a clearly defined plan are the keys to multiplayer mission success. The added flexibility of having two or more players in a flight is very nice since human players are much more adaptable to a fluid situation. When flying with Doug we worked very well together identifying threat aircraft on our flanks and positioning ourselves to cover one another. In one particularly exciting mission a MiG-21 snuck in under the action and managed to get on my tail. A spiraling, descending dogfight ensued taking me from 20-thousand down to the deck where I was quickly running out of airspeed and altitude since I was stubbornly holding on to my air-to-ground stores. From a few miles out Doug locked up the bandit causing him to disengage and go defensive. That was all the opportunity I needed, launching a “MADDOG” AMRAAM at him with no guidance at just outside of minimum range; just one example of many such exciting moments that my new foray into MP flying. [From my point-of-view, I was trying desperately to get a solid lock or a clear shot returning with full burners. My wingie and I were still far enough away that the 9 mike wasn’t a possibility. With Chris’ wingman taken out a couple of minutes earlier, the spiral downward only allowed for a brief moment to engage — and he didn’t have much time left. The MiG went defensive on my lock and that proved to be his fatal mistake. I was ready to take the shot when Chris said he had him locked-up and was going for it. Splash one MiG. Another example why using voice comms adds so much. Very exciting stuff. – Doug]