And there is nothing quite as enjoyable as cooperating with another player on an airfield strike. Here I zoom down the runway pickling off Durandals while Doug drops some iron bombs on the hangars at the same time. Later analysis shows we did a good bit of damage, taking out about 50% of the airfield capacity.

Of course, flying together means dying together, and we did plenty of that too! Doug and I had synchronized ejections over a particularly nasty SA-6 site that blotted us both from the sky at the same time. Another time I was lined up on final when I saw a smoke cloud emanating from the far end of the runway; seems Doug had a bit of a cross country excursion that was ultimately stopped by a K200 Air Defense Vehicle. He did get credit for the friendly kill. As did I when I accidentally shot down a friendly F-16 that was engaged in a fight with a MiG-21.[Hey Beach!… quick – remind me… what key works the wheel brakes…? BANG! Nevermind… -Doug]

Here we see Tom Cofield nursing his badly wounded airplane back to home base. ATC gave me perfect vectors to landing and I pulled off onto a taxiway to watch Tom’s approach. His engine refused to give much power as it poured smoke behind him. As he crossed the airport boundary his aircraft wouldn’t respond to his controls and he ended up smacking into the airport perimeter fence. MP is filled with cool moments, high tension and really good laughs. 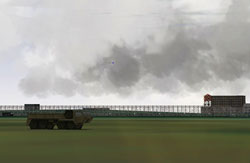 Debriefs are a fun time to sit around after the mission and “hangar fly” with your buddies. Explanations, lies, embellishments, and confessions abound during the recap. Fortunately the mission debriefing breaks everything down for each flight member so the truth shall be revealed! 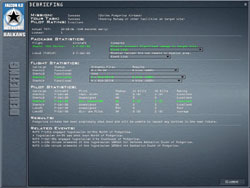