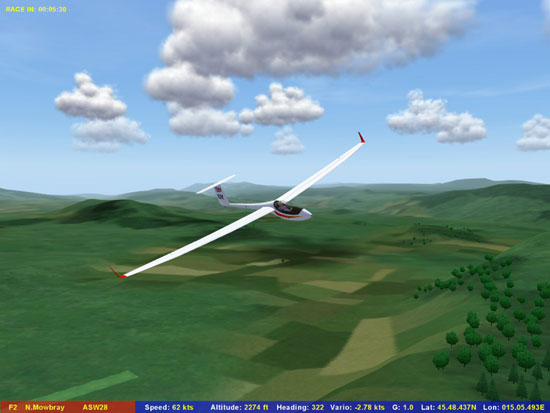 I find myself a little biased. Glider riders have been short-changed in the sim world over the years althoughSilent Wings springs to mind, which is a capable sim in its own right.

Condor works. It does exactly what it says on the tin! It is a dynamically accurate simulator of competition standard glass built gliders; built by gliding enthusiasts for gliding enthusiasts. System requirements are not overly demanding though make sure you have a joystick and rudder for full effect. I have deliberately stayed away from the technical aspects of this discipline which you can indulge in at your leisure. They are all there for the glider buff and I doubt that anyone who finds themselves sitting in a real glider on a weekend, and likes the sim thing, will be not be disappointed in this product. Third party support is limited. The developers, currently on their fourth minor patch, will let you release skins for aircraft. They will not however let any third party models into the fray unless they come via an official patch. Much like IL-2 I can see they are trying to maintain the integrity of their baby, which can only be a good thing.

I feel that, at a glance, this sim is limited to true enthusiasts. The range of aircraft is a handicap. The Fox does provide something of a substitute for a 2-seat trainer but this sim desperately needs an ASK21 or ASK13 for the novice to putter around in. There are also calls for more vintage gliders that still inhabit gliding clubs across Europe. Talking of Europe, scenery is the next thing that needs to be addressed. It looks charming but it is non-specific. Add-on areas are on the way which will help users to “fly around” terrain that is familiar to them. It’s almost there truly it is, give it a go!

Nick Mowbray is currently in his 22nd and final year of Army service. Having just got the hang of it he is being pensioned off! Spare time is indulged in aviation (should of joined the Air Force but the office was closed!). Interest in simulators started in the early 80’s aboard a ZX Spectrum and has proved a constant companion and money drainer. He holds a Private Pilots Licence and has had a life long passion for gliders inherited from his father.

The web site for Condor: The Competition Soaring Simulator is here.