Chris: Will environmental weather effects such as reduced visibility, rain, and changing winds be modeled?

Dante: Yes. Wind and rain are already modeled. As well as cloud cover (but these need a revamp, as the code is a bit old now). 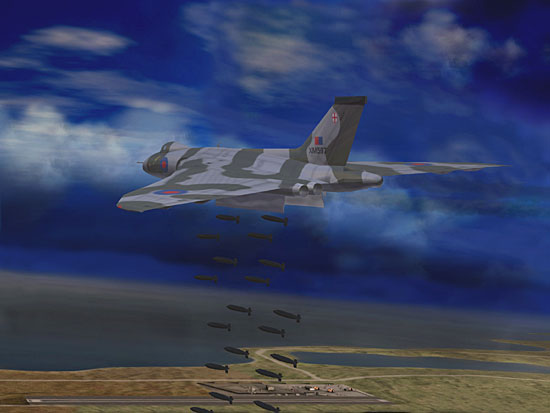 Chris: To what depth will the Blue Fox radar be implemented in the Harrier? Will the user be able to control radar scan volume (elevation, azimuth, range)? Will the four primary modes of operation be implemented (search, air-to-air, air-to-ground, bore)?

Dante: At the moment, there’s only a B-scan test search mode with manual control of the radar designator to lock targets, it works very well and one nice thing (which I’m not sure how real it is) is when you destroy a plane with a missile you see the cloud of debris raining down on radar screen, and each piece of debris is really a big chunk of the destroyed plane falling down. Elevation, azimuth and range are already adjustable and, since these use small manual switchers in the real cockpit, messages pop up in console text lines saying ‘elevation set to X degrees’, ‘range set to 15 miles’ etc, if I remember well, a bit of this can be seem in one of the missile shot videos that Steve posted a while back in SimHQ Jet Thunder Forum. Of course for the final product, we expect the Blue Fox to have all the most important modes working (air-to-surface, bore, etc.).

Dante: Fully 3D with 6DOF, clickable? Not impossible to do, and we’ve received many requests for that, but as we’re very low on resources, we can’t promise such advanced feature.

Chris: Will NaturalPoint’s TrackIR be implemented?

Dante: Yes! Steve even received a unit, kindly submitted by Natural Point, now it’s up to him to implement its support (not hard since we have full 3D cockpits and already fully working view panning).

Dante: Correct, we even talked a few days ago about campaign attrition — it’s a factor that Steve already has inserted in the server code. Resupply will be very important for the ground war as well — for example, there’s a C-130 flight from Argentina periodically delivering supplies to the Argentine in the islands, shoot that flight down and you will see the effects in the effectiveness of their ground units. 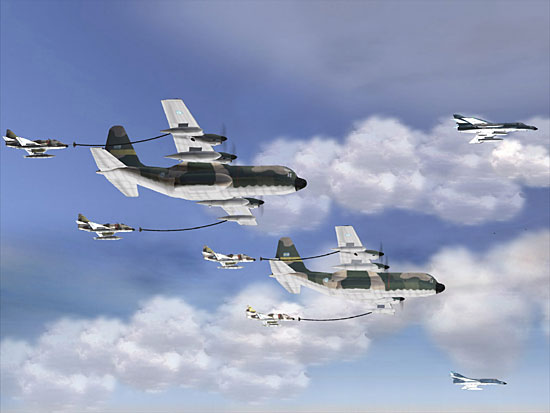 Chris: Along the lines of the previous question, will all campaign assets be on the campaign map at one time (ie: EECH or Falcon 4) or will they be hidden as we fly mission specific sorties?

Dante: It’s pretty interesting to explain: as Steve correctly choose to have even the single player campaign played in a client-server system, what happens in our current test stage is the follows: we run the server (or what we call ‘campaign server’), it opens a window with a “god mode” view of the world. Not ready now, but in this god mode, you can track positions of all units in the world. Of course there should be included for final product, the “fog of war” — the view limitations a campaign General have (limits imposed by your side’s intelligence reports or limitations of radar cover). We see AI units doing their stuff, although the system isn’t yet feeding them ‘on-the-fly’ with missions based on campaign’s logic Then, we run our client, it has variable spawn positions, so, what it does is to spawn a flyable (player) plane out of your side’s stock at a choose friendly location. So, you fly and do your part for the campaign.

What should be added, as I’ve said, is a more ‘strategical map’ feeling to this ‘god view’ mode in server windows, and of course the so called ‘fog of war’ (view limitations and show only known contacts etc), and of course, all the campaign assets in numbers overlayed in this display.