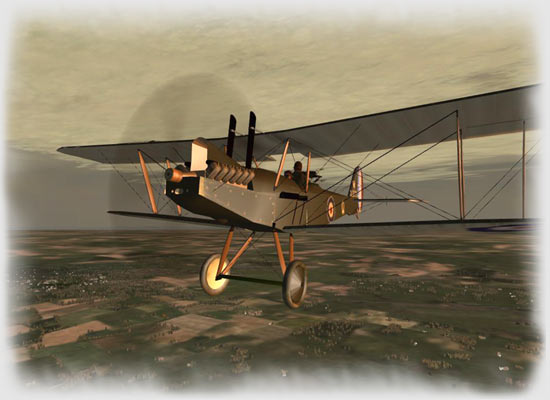 If you have been reading recent SimHq News, or spent any time in our forums lately, you probably already know something about a new add-on for Microsoft’s Combat Flight Simulator 3 called Over Flanders Fields. (Also known as ‘OFF’). For those that haven’t heard, it is a free World War 1 addition to Microsoft’s last attempt at air combat simulation. OFF is good news for gamers, and WW1 aficionados in particular, because so far it seems to be a pretty noticeable improvement to the original game. The reason for my caveat ‘so far’ is because OFF is still very much a work in progress; much still needs to be done, and there are some pretty stringent limitations associated with the CFS 3 ‘engine’. Nevertheless, what I see in ‘Phase 1’ is exciting. I expect more WW I sim ‘goodness’ in the form of new aircraft, skins, historical missions and campaigns available to the community in the near future. 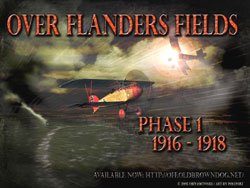 OFF is a significant change to the original CFS 3 sim in numerous ways, hence I am hesitant to call this just an ‘add-on’. Its really almost a completely new game based on the CFS 3 engine. Another notable fact: OFF is free!… A product built and distributed by dedicated members of the CFS 3 enthusiast community, not a commercial endeavor created by a staff of full time programmers! Since this is still CFS 3, albeit with many changes, I think its appropriate to recommend a review of my original CFS 3 evaluationhere. This article will explain in more depth and detail some the assets and liabilities existent in the original Microsoft game that are still applicable to OFF.

The first major obstacle potential OFF players must overcome is acquiring the software. It’s only available as a download from the developer’s website. Downloading my copy was a real challenge due to traffic volume, slow file transfer rates, and the 600 MB size of the original installation file. I experienced several ‘stalled’ downloads and it took four tries to get a good, uncorrupted file (No… I DIDN’T use a download utility as was recommended on the OFF web site!). If you are not lucky enough to have broadband.. well… you’ll likely face a much bigger challenge than I did.

My installation was error-free, but I carefully followed the accompanying instructions; initially, I was concerned because of various problems I read about in the SimHq forums. Installation of OFF can be problematic, but if you can follow instructions everything should be fine. I highly recommend careful review of the ‘Read me’ and FAQ BEFORE installing. If problems are encountered there is plenty of help available between the documentation, the website and various online forums.

Game hardware configuration took several tries before I found it acceptable, it’s just as ‘finicky’ to optimize as OFF’s parent game CFS 3. I had several minor issues initially; ‘stutter’ being the most serious one, but a few trips to the forums provided the solution for it and the other minor problems I encountered. Game options were a bit confusing; I didn’t find them as intuitive as other games, but I managed my way through with reference to the aforementioned information sources. They aren’t unacceptable, just a bit unusual.