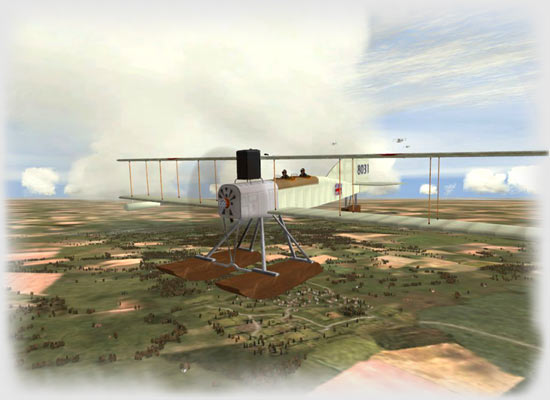 Just like CFS 3 there are four modes of play, Quick Flight, Missions, Campaign, and Multiplayer. I dove right into Quick Flight; I was greeted with a screen informing me that there wasn’t an active pilot selected! One confusing pre-play setup requirement I originally missed is the creation of a pilot! (It was stated in the documentation, I just didn’t remember it). A player-created pilot is required for all modes of play, including Quick Flights, which I found a little odd. Not that it’s a bad idea.. I just didn’t expect it. Once your virtual persona is established you are greeted with a screen for your selected pilot that allows setting the default parameters for ‘his’ quick missions. These parameters can be changed again in later GUIs farther into the Quick Flight process if you decide to do something other than your standard ‘canned’ sortie.

The Missions mode initially caused me some concern. I thought I had a bad install because I couldn’t fly a single mission. I got into the selection screen ok, and there was a ‘briefing’ available, but when I selected ‘fly’ nothing happened. Closer examination of the GUI revealed there weren’t any missions listed for selection. Another quick visit to the forums provided the answer. The development team simply ran out of time and decided to release OFF without including any pre-built single missions. One of the laudable goals of the OFF team is to include historical single missions, not CFS 3 comic book style ones. Historic missions take much more time to research and build than fictional ones; therefore they will be released as they become available in the near future. For people who really need single missions ASAP, some are available for download on various CFS 3 websites. If those aren’t enough, apparently there is a way to use the CFS 3 mission builder and make your own. I personally have not attempted to build any yet, so I cannot vouch for its functionality.

Campaign mode is right from CFS 3. It is a dynamic campaign, and while not fully optimized in the first phase of OFF, it could eventually grow into something really worthwhile. Every campaign mission I flew was different and pretty interesting, despite some minor bugs, like not getting credit for a scramble sortie because I didn’t over-fly enough of the scheduled waypoints. Frustrating yes, but I can live with it; I’ll just make sure I accomplish that little chore the next time I do a sortie like that.

There are also some organic CFS 3 limitations that are irritating, like looooong-boring NAV legs to get to the combat area. These WWI aircraft, cruising at 90 MPH take forever flying any distance, and the ‘warp’ function of CFS 3 doesn’t work most of the time because of the low speed of these aircraft. It’s the old ‘Catch 22’… every ‘warp’ I attempted resulted in a warning of ‘Not enough airspeed’; but if I get fast enough to trigger the warp I damage my frail WW I warbird! I am afraid this is probably hard coded into the game engine and going to be one of the things that can’t be fixed…

OFF’s Multiplayer functions just like CFS 3. I tried to connect to several online games but was always denied access due to an ‘incompatible game version with host’ warning. The latest OFF patch had just been released, and was applied to my installation. I’ll bet none of servers I attempted to join had the current patch and I am reasonably sure this was the cause of my connection troubles. I did get joined over my home LAN and played a few coop single mission games. It works just like CFS 3, meaning no multiplayer campaign mode like the IL-2 series. A work-around for dedicated online campaign aficionados could be a series of single missions flown in order… That way it would be ‘dynamic’ to everybody but the ‘campaign’ host.