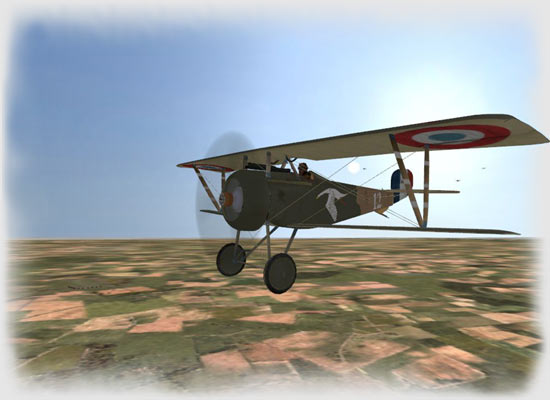 The flyable aircraft included in Phase 1 of OFF are:

More aircraft are planned and should arrive as the OFF team completes them.

The Flight Models (FM) are appropriately different between each aircraft type, with individual strengths and weaknesses that can be exploited during game play. They have some pretty realistic ‘feel’ in several areas, like power loading, roll rates and rudder effectiveness, but unfortunately CFS 3’s lousy high AOA algorithms are still evident. These aircraft are simply too hard to depart and too easy to recover. Stabilized spins were something unachievable in any every aircraft I tried, they would always recover if left alone. I am under the impression that this is NOT something that the OFF development team can fix. Too bad, because a hardcore FM in a WWI Air Combat game would be something unique in the current simulation community.
AI is always going to be a controversial topic. There are several reasons for this, the primary one is that realistic AI is very hard, if not impossible, to achieve in a PC game. Some do a better job than others, and Microsoft has traditionally been one of the worst; therefore it should be no surprise the AI in OFF is the same as CFS 3, in a word… DUMB. The AI defensive tactic is predictable; they nearly always initiate a turning climb to a stall and then roll off on one side to do it all over again. On high difficulty settings the only major difference I note are the extra climb ability of AI aircraft (NOT yours though!) and the ability to make sniper-like long range gun shots, especially in high aspect passes. The weak AI may be another unfixable limitation in the CFS 3 engine, I really hope not, but I have serious doubts that much can be done to improve it.