Let’s get this straight right off the bat and spare you the suspense. I suck at LOMAC. No really, I’m terrible. I’m new to the whole LOMAC/Flaming Cliffs scene and therefore I approach you (humbly) as a greenhorn. Be gentle with me.

Obviously I’m not new to combat flight sims. As a matter of fact, I pride myself on having been personally responsible for the loss of over 20 airframes during a particularly long stint of flying and writing Falcon 4 campaign mission reports. You don’t fly 80+ missions in F4 and not learn a little bit about how to fly a jet. For instance, I can tell you precisely how many pounds of pull are required to physically move the ejection handle in the Falcon. Practice makes perfect.

LOMAC, unfortunately for me, shares almost no common keys with F4, making the transition to my new study a difficult one. I’m making progress though, and from what I’ve seen so far, I’m in for a heck of a fun ride! While my “hands on” time with LOMAC has been relatively brief, I’ve followed closely the developments in the LOMAC community. In truth, all this time I’ve just been waiting for a rig powerful enough to run LOMAC to my satisfaction to arrive on my doorstep, and that day finally came a few months ago. So I have a long road of training, familiarization, the stock campaigns, learning to fly the advanced flight model in the Su-25T, and many other facets of the sim in front of me. To those of you that have already gone through the original missions and have been itching for more, The Black Sea Operations should be just what you are looking for.
From the BSO creators:

“THE BLACK SEA OPERATIONS is a sweeping series of epic campaigns spanning three major military operations over the course of two years. The story of THE BLACK SEA OPERATIONS is told through the missions flown by pilots caught up in a series of wars which erupt when a resurgent Russian Empire threatens petroleum sources in the Black Sea region. The backstory to the conflict has been written by four people and aims to bring a totally new experience to the Lock On: Modern Air Combat theater of operations. The campaign set will span two years of conflict set in a hypothetical scenario in the near future through 100 missions. Operation Southern Cross is the first chapter in the saga comprising the first 30 missions set in Georgia focusing on the 493rd “Grim Reapers” F-15C squadron.” 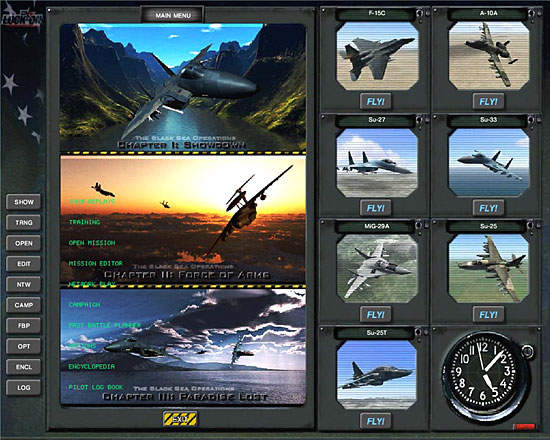 The new campaign (actually it is a war) is not merely a collection of cobbled together missions but is an integrated story in which you will participate. With a logical flow of missions, distinct phases, and a “novelesque” story tying it all together, The Black Sea Operations (BSO) represents an enormous undertaking for the creators. New menu screens, briefings, and load-out screens coupled with dense and varied entities within the missions make for a very busy bit of work for this fledgling F-15 pilot.

Set in the far eastern region of the LOMAC map area, the mountainous Caucasus provides an interesting and challenging setting for the prosecution of the war. Your enemy is entrenched in the valleys and high alpine passes, poor weather and darkness will challenge your flying skills, and the high tech might of the Russian combined forces will be breathing down your neck. It’s enough to make your hands start to sweat on your HOTAS.