The Sparrow hits the Su-33 but once again it staggers on. The F-15 smells the blood though and he quickly gains an advantage on the wounded Flanker. One missile shot goes wide but by now he is in guns range. With the Flanker carving wide and gentle turns the Eagle gets an easy gun kill as smoke belches from his canon port.

Waiting in the wings another F-15 hangs on the tanker waiting for his turn, but the battle will be long over by the time he arrives. 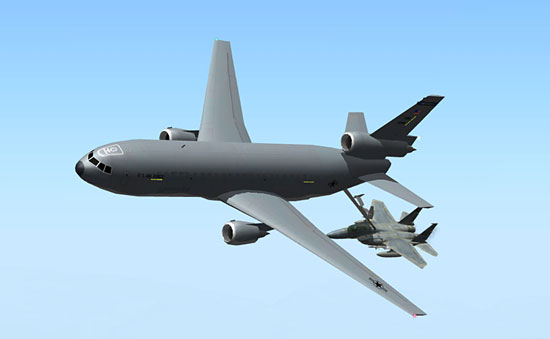 In the end 14 Russian planes go down and 8 Allied aircraft are shot down (7 U.S. and 1 U.K.) A ninth Allied aircraft was flown into the water by some dolt, but there is no time to investigate that accident (surely!). The air battle was epic. One of the best I’ve ever had the pleasure of flying in. With more time under my belt and experience with the avionics I am hopeful that I’ll be able to better contribute to the war effort as time goes on.

From the BSO creators:

“So why 100 missions? We decided this would be enough for hours of game play to provide enough experience with the F-15C for the player to become proficient at using the aircraft against all opponents offline and online. This would be the perfect F-15C training tool.”

“The missions we are creating do not take a traditional approach to construction. We begin from the ground up by setting up simplified air defense networks for the good guys and the bad guys. These networks must be simplified as the current hardware can only support so many ground vehicles in the LOMAC world so a compromise must be found. Next, we isolate the airbase from which the player will take off from. We add immersive elements to give the player an impression that the airbase is alive such as moving trucks, static cargo aircraft, airbase traffic, and helicopters buzzing overhead. Next we add random flights with different tasks such as cargo flights, observation flights, and ground strikes. All these aircraft are doing their own thing and not interfering in the player’s mission, although the player is intended to cross paths with them. Each high quality mission will be hand-made but will look and feel dynamic yet still have the scripted action to tell the exciting story of this epic two year war.”

The BSO integrates the talents of many individuals, bringing together the story and mission design, specialty skins, and even cut-scene movies. My brief time with The Black Sea Operations package left me with a very favorable impression. The story and the missions are interwoven in an entertaining fashion and the density of objects and action really do suck you in and make your heart pound. I’m looking forward to flying all of the missions in the coming releases of The Black Sea Operations theater.