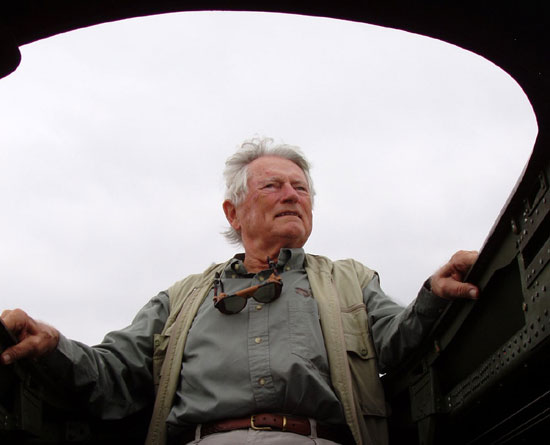 After about forty minutes Ray showed up with the others who would be going with us. Ray’s copilot for the day and two others beside my son and myself. We all gathered about the aircraft like kids in a candy store. The weather was an issue so we decided to wait a bit for further improvement. We got a bite to eat and rendezvoused back at the plane after about an hour. After some formal introductions we gathered around the waist entrance on the starboard side. Ray gave us a short brief about what we would be doing and how things worked inside the aircraft. We all were going to be given a chance at the controls and we would have free reign inside the aircraft once we were airborne.

The weather had picked up a bit and would allow us to do a low level VFR run from Falcon field in Peachtree City over to Augusta Georgia’s Daniel field where the Belle would be spending the weekend on static display at a local aviation day. Ray would be our Pilot and Ron Gause would be our Copilot officially. Ron was getting some dual from Ray for future operations with the aircraft. Ron is active here in Peachtree City with the Dixie Wing of the commemorative Air Force. Yetta Samford who had the good fortune to actually fly the real thing was also with us. A fine gentleman and obvious airplane enthusiast, it was uniquely special to see him reunited with what could only be an old love. I don’t think his feet touched the ground the whole time he was with us. Yetta had completed several missions right at the end of the war in England with the Eighth Air Force.

Bob Preacher was with us also and he was supposed to have a companion who was also a veteran, but due to health issues he could not be with us that day. We had a special treat in store for him though. Myself, and my son Brian rounded out our crew and we eagerly climbed aboard and took in the sights and sounds of the B-17’s interior. Ray had decided to remove the rear upper deck observation glass for our flight that day and it made for a great place to watch the engines start and the taxi prior to our takeoff.

We all decided who would get to sit where, and it rapidly became evident that it would be age before beauty with the “old guys” up front for start and takeoff. As Ray and Ron completed the checklist, I marveled at the cockpit and the size of the Yokes and the throttle quadrant. The restoration was superb and the aircraft looked like she had just come off the assembly line. We got to stand up behind the driver’s seats as we fired up those old Wright Cyclone’s and once they sputtered to life it really hit me. I can’t believe this is happening, I felt like I was the luckiest man on earth! I know I wasn’t the only one! 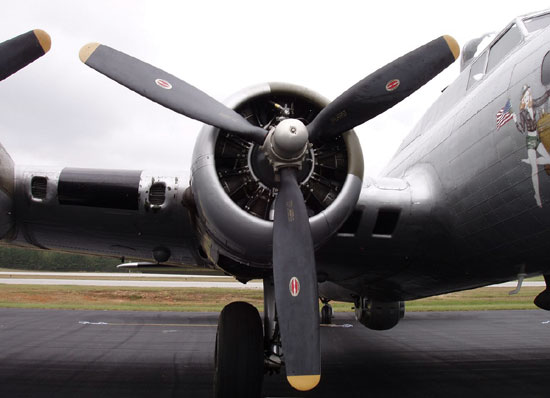 The engines rumbled to life and we gingerly taxied around a few light planes on the FBO line and made our way out to the runway. Taxiing this beast is quite an effort and the wings are way out there. Differential thrust is the big player in turning the aircraft on the ground and takes advantage of the “castering” tail wheel. “Liberty Belle” vibrated and rumbled with those big Wright’s idling sweetly and I found myself eager for the takeoff roll. After a few run ups we were out and onto the runway with everyone strapped in. The power came up and it got really loud as we released the brakes. At this lightweight the “Liberty Belle” leapt into life and we were airborne very quickly.

As soon as we got off, we all unstrapped and stood up to watch as we cleaned her up and closed the cowl flaps for cruise flight. We would only get to about 1,800 feet on our trip so it happened quickly. All of us were grinning from ear to ear and I know mine didn’t come off until well after we landed.

What I remember most about the flight is the sound of those four engines. There isn’t anything quite like it that I can describe. Four 1,200 horsepower, nine cylinder beauties swinging almost twelve foot Hamilton Standard props is an absolute thing of beauty. It took my breath away. It was smooth, it was loud, it was good. After we got cleaned up we had a short mission to complete before we headed for Augusta. Bob’s buddy had not been able to come out to see or ride in the aircraft that day so we figured we would do the next best thing. We headed towards his house and flew circles overhead with the Belle and I’m sure he didn’t miss us. After a few swings around the house we headed out on our way to Augusta. It would take about 45 minutes or so enroute. This allowed plenty of time to get to know the aircraft and explore all the crew stations. It reminded me of one of my favorite television shows as a kid,Twelve O’clock High. I could almost hear the theme music playing as we rumbled along standing behind the pilots with my hands resting on the top turret assembly. Turns out I would be first at the wheel as I was the most experienced pilot there besides Ray.