I traded seats with Ron and put my hands on that big yoke. Right in the middle it had a classy art deco type winged Boeing logo. Here I was at the controls of a Boeing B-17. My heart pounded and I put my left hand on the huge throttles. I almost couldn’t hear Ray, and my mind wandered a bit. We were pretty low and it took a watchful eye on the altitude, but I quickly became comfortable as this was just another aircraft, unique to be sure, but it worked like all the others I have flown over the years. The yoke is huge and now I know why. She is a very heavy aircraft on the controls and you really have to fly it. It takes a lot of movement to get anything to happen and I thought how much this made you pay attention to what you were doing. No finessing this beast. I did some turns and looked outside at those spinning monsters out on the wing. Absolutely fantastic was all I could think! After getting a few photos of me driving it was time to change seats and let someone else have a chance. Everyone got a chance at the controls and did a great job. I’m sure by the grins that everyone was as euphoric as I was about this whole experience. It was very cool seeing Yetta at the controls. He looked like he belonged there. He wore a pair of wrap around type sun glasses which hid everything behind them. I think I know why.

We took a pretty much direct route over towards Augusta. The Belle had a set of modern instruments over on the Captain’s side, which included a Garmin GPS and a few modern navigation and comm radios. These come in handy in today’s modern Air Traffic environment I’m sure and would be considered a necessity for any flying aircraft no matter how historically accurate it’s going to be. At such low altitude I’m sure we turned a few heads. How many folks have ever heard a sound like that going over their house on a cloudy fall day? We flew over towns and farmhouses not dissimilar to those in England and my thoughts turned back to what it must have been like. Returning home after another mission from over enemy skies filled with Flak and fighters. I have the utmost respect and admiration for what those fine young men did back in that far off war.

As we got close to our destination I became enthralled with the view up in the nose. Sitting at the bombardier’s station was a real treat. You could sit in front of the Norden Bombsight and look straight down. Through the bug spattered Plexiglas the countryside rumbled by always with the sweet sound of those big radials on either side of you singing their ancient tune. It was magical, nothing less comes to mind to describe it. The sights and sounds and smells all came together and it put goose bumps on my flesh. I could tell my son Brian was affected the same way. He had a turd-eating grin on his face too, and he kept shouting at me “I can’t believe we are flying in a B-17!” I agreed in kind. At one point I stuck my head up into the navigation bubble just in front of the cockpit. I had my camera with me and almost on impulse turned it on Ray and Bob who was flying at the time. I got a shot but it didn’t come out real well. It’s precious though. Ray has his hands in his ears and his mouth wide open and his eyes all wild in that stupid gesture kids do to you as you drive by in the car. I get a chuckle out of that one each time I look at it. 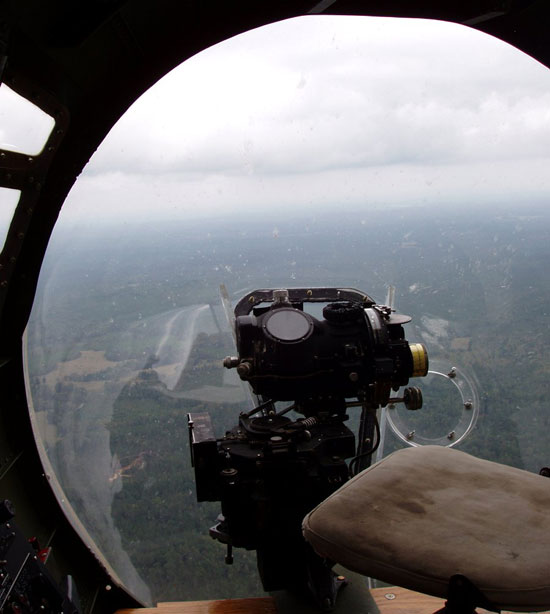 I spent the last few minutes of the flight up front in the nose. As we approached the field Ray had another surprise in store for us. We took aim at the approach end of one of the runways and poured the coals to her. We got down to a few hundred feet and screamed across the field at about 200 knots. She would go faster, but it’s important to preserve this piece of history so Ray doesn’t push the old gal too hard. It was still spectacular. We pitched up and got on a downwind for landing and Ray and Ron got busy with the landing ballet. I cheated and stood up for the approach and watched Ray paint her on the runway, a real squeaker.

We taxied in and rapidly gathered a crowd of the locals as we maneuvered her into the parking spot for the show. It was almost like being a celebrity. The skies were still gray, but that couldn’t keep the sunny smiles and laughter off our faces as we shut her down and climbed our way out into the fresh air. You could see the envy in the eyes of the show volunteers and airport folk. They would have given anything to trade places with us. It was all over much too soon as these kind of things always are. I watched the older guys throughout the flight and I think they enjoyed the experience on some deeper level than I. They had touched a piece of history that they were familiar with. Something that dreams were made of when they were young, larger than life, and low and behold here it was. Placed in front of them to touch and smell and it lived up to their memories and their dreams. We gathered for a photo after the flight and as I look at it now, it reminds me of wartime photos of crews who had flown their last missions. We all have big smiles on our faces and a true bond was struck among us even if only for a few hours. 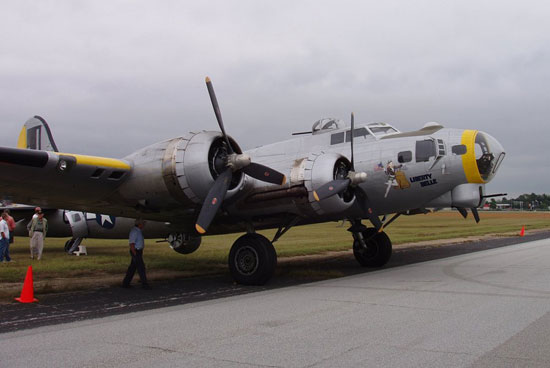