From it’s release in 1998, several key features of Falcon 4 have made it a favorite of air combat simulation fans all over the world. These include the “sims within the sim” known as Falcon 4’s Campaign Engine and the Air Combat Simulation, which includes it’s high fidelity avionics, weapons and defensive systems, flight model and deep-down attention to detail. And then there ‘s that fantastic interactive clickable 2D cockpit.

Instead of memorizing series of key presses, or assigning them to their HOTAS, players could, if they chose, look around inside the cockpit, find the button or switch they wanted and click it with their mouse. A true button-pusher’s delight, the Falcon 4 cockpit is legendary and has certainly added to the immersion factor of the simulation, to the simmer’s holy grail known as suspension of disbelief.

Over the years the Falcon 4 cockpit has evolved from something with quite a few functions active on the front panel and adjacent consoles, to one with darn near everything active everywhere you look. Setting up for your GBU bomb run, you click on the master Air to Ground button. You cycle through the hard points by pressing a button by the MFD, make the Targeting Pod the SOI (sensor of Interest), activate the laser with another click, then zoom in, find your target and lock it. And that’s just one area of use with this cockpit. Virtually the entire engine startup sequence of an F-16 is possible using the clickable 2D cockpit.

As the Falcon 4 cockpits evolved, modifications to them appeared and many talented artists had their hand in creating some absolutely stunning works. “Photorealistic” became a word synonymous with these cockpits, and for good reason. To this day, I am amazed at the graphics I see on my monitor of the F-16 “office”. 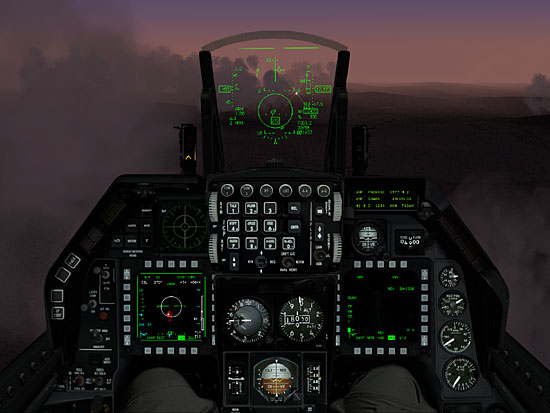 Aeyes, aka Eric de Best, is a professional artist and long-time simulation fan, living in the Netherlands. A very busy guy on a average day, he’s even busier lately, with the birth of his daughter on December 20, 2005. Our congratulations to Eric and his wife!

In the midst of all of this, we caught up with him and somehow persuaded him to take a few moments and share with us how he got involved in simulation cockpit art, Falcon 4, Falcon 4 AF, and some technical details I was curious to know.

Just how does Eric go about making a graphical cockpit for a computer simulation? What reference material does he use? How does night lighting work? In other words, I had a whole bunch of questions! Eric, being the nice guy that he is, was gracious enough answer these questions and a whole lot more, with a few graphical surprises thrown in. With no further delay, here’s our conversation.