Put These Guys In Control of a UAV (and then duck)

With the bottom bracket now firmly decided, the switch picked that exact moment to flatline and then petulantly decided to quit assigning dynamic IP addresses. This gave me the opportunity to get completely in the way and annoy everyone trying to fix the problem. What was worse, “Lumper” explained, “No one knows the password to the switch.” Frantically trying to get things back to normal, they finally got into the switch and began assigning static IP addresses to participants.

This also gave me the liberty to get a few more interviews. One was with Jordan “Pudge” Miller of the Collings Foundation, a non-profit group associated with the preservation of aviation history. He, along with Robert “JPClarke” Spivey and Chris “Wicked” Mitchell, had driven in from Houston and they were perfectly happy to give me some of their time. 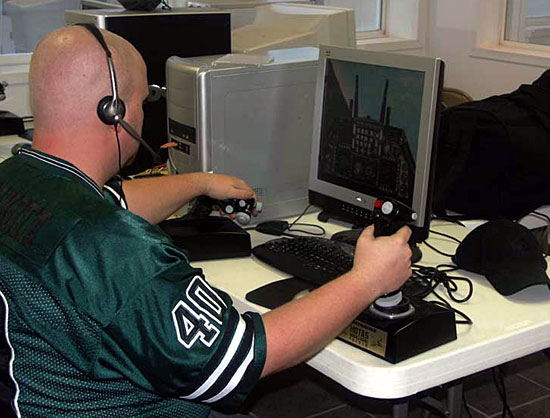 “Pudge” at the Computer

Turns out they have the only working civilian-owned F-4D, and to say it’s immaculate condition is somewhat of an understatement. Lovingly maintained by a dedicated crew of technicians, the crew from Collings had plenty of pictures of her to go around and one photo montage they were particularly proud of was one of the last remaining F-4 trainer cockpits built by the Link Company, the people that brought you the infamous Link Trainer for learning instruments. It is a faithful reproduction of an F-4 cockpit down to the WSO’s station. Once used by Luftwaffe aircrews training at Holloman AFB in New Mexico, the Air Force has asked a Collings representative that if he wanted it, to go load it on a truck or it was going to the metal shredder. I’m sure that someone broke the speed limit between Houston and Odessa that day and I can get a king-sized picture of a Collings employee, pulled over on the side of the road, with a somewhat befuddled DPS State Trooper asking, “You’re on your way to pick up a what?”

The Company Has Arrived

The second interview during the lull in combat was with Michael “Superman” Kent of Lead Pursuit. He’d left briefly to go pick up supplies at a local Best Buy, supplies being the latest Logitech gaming keyboard, and when he returned, he immediately asked me, “You the guy from SimHQ?” I nodded and we stood off the corner watching “Mad Dog” assigning IP addresses on a large easel.

Of course, I had to ask about the next patch and what the status was. Kent was able to tell me that the disappearing cursor problem for the NVIDIA cards was fixed to the satisfaction of the patch QA crew. He listed a few other small addendums, but he didn’t think the shimmering problem with NVIDIA cards was going to be fixed soon and cited some problems with the drivers as being a major cause for headaches. I didn’t bother asking when.

When asked about the future, Kent stressed that continued support for the current product to keep it at 100% functionality was the priority at this time for Lead Pursuit. Were they planning something new? Yes. Did they have a good idea of what it was going to be? Yes. Did they know when work on it would begin? Yes. Were they going to tell me what it was?

On the other hand, they are glad to be fully supporting the Stopworks cockpit, proving the approachability of the company. With Tom’s HiTilesAF being such a success, it stood to reason that if someone had a decent idea that Lead Pursuit could be expected to be cooperative, but not at the expense of the work they’d invested in it. There is a right way and a wrong way, Kent explained, and provided you do things the right way, you can expect that Lead Pursuit is willing to discuss an opportunity. 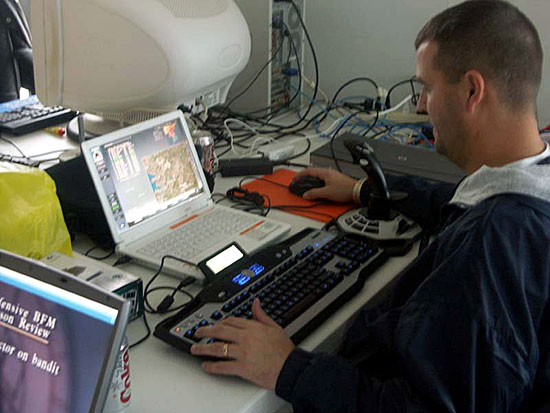 “Superman” and His Wife’s Computer

A word on the stability of Falcon 4.0: Allied Force multiplayer code. Kent hadn’t had a chance to bring in his real machine and had brought his wife’s laptop with him. With a 1.8GHz AMD Turion processor, 1GB of RAM, and plain vanilla onboard graphics, he was still getting between 18-20 frames per second in multiplayer mode. Not bad for a game meant for higher-end machines with beefier processors and video cards.

Meanwhile Back At The Ranch…

With the switch difficulties out of the way, the 1v1 competition went back into high gear with some warm-ups as “Bogll” finally got a chance to square off against “Black Angel”, a younger Baylor grad in the IT field. The two tied into the switch and gripped their controllers and with a “fight’s on!”, the two went three rounds.

Shuttling back and forth to both, I watched them fight for supremacy, each desperately clawing through the simulated skies in order to get the upper hand on the other. While “Black Angel” may have been the only participant using a Saitek X-45 for his flight controllers, it didn’t seem to be a handicap as he went for a beautiful shot that shredded his adversary’s tail control surfaces. “Bogll’s” bid for the title went south as his opponent got two of three, advancing him to the next round and put him squarely up against his commanding officer, “Mad Dog”.

“Mad Dog” announced the schedule. We would break for lunch for an hour and return for the title bout, after which the 2v2 competition would begin. We “caravanned” to a Luby’s in close proximity to the airport, important because of the steadily worsening weather and the buildup of ice on everyone’s vehicles. Gathering at a single table, I was witness to an utterly fascinating conversation that made me realize something really fast. I was dwarfed by the intellect and experience these men possessed. A midget among an NBA team. I kept my mouth shut for the balance of the meal, opening it only occasionally for a forkful of blackened tilapia and my twice-baked potato.

Among the many conversations was an open-ended question by Mike Kent: What about including a feature that enabled you to post an ATO online for members of an online squadron to sign up for missions? This was greeted with enthusiasm and I noticed something very telling. Most of the discussions had zilch to do with graphical glitches or perceived lapses of realism. Most were wondering about how to make the experience just a better overall package. Most of those assembled at the table were more interested in the idea of having working MFDs that transmitted real flight information to the pilot. Thus far, FS2004 is the only title to incorporate this, and most of the congregation was interested in seeing it in Falcon 4.0 as well. There were various discussions on how to get this done that made me want to reconsider a career in ditch digging, but these were not uber-snobs who spat upon lesser mortals. Little wonder. Most of these guys were Texans who were just as at home in a bass boat as they were behind a Cougar HOTAS. They were in it for the fun. 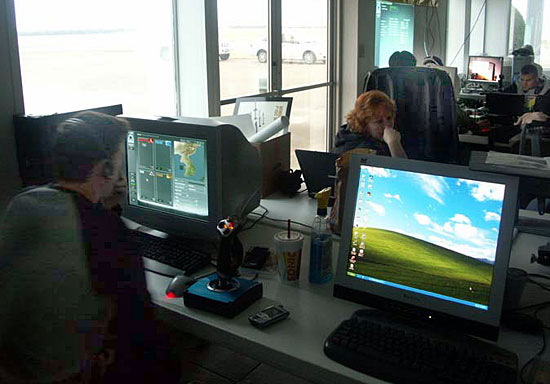