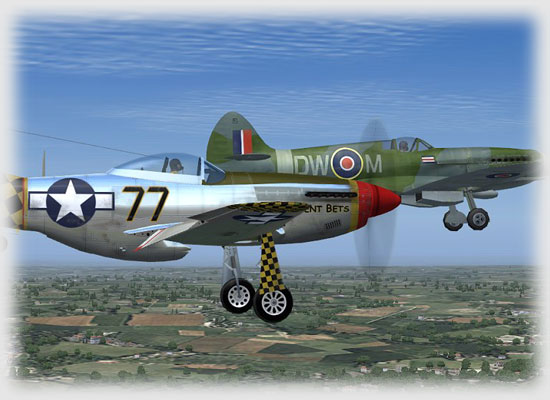 In the interest of fair disclosure, a reminder SimHQ Staffer Scott “Blade 124” Gentile is an employee of Shockwave Productions. Scott did not provide any editing or content regarding this review.

One of the first things I’d like to get out of the way is the fact that I am a VERY discriminating payware buyer. What’s payware you ask? Payware is the one of the wonderful reasons Microsoft’s flight sim line has enjoyed so much success over the years. Microsoft Flight Simulator has an open design philosophy which caters to the aftermarket crowd both freeware and payware. Freeware encompasses all the wonderful tool, utilities, add-on aircraft and cockpits which make flight sim really shine. What comes in the box is but a scratch on the surface of what is available to you as a user of this software. Over the years many artists and programmers have taken advantage of this open design to provide just about everything one could imagine to enhance the experience and give us what Microsoft did not. Freeware is everything available for free. It’s provided with no strings attached and it’s become one of the great things about this sim. Payware is basically the same stuff but it’s packaged and sold by those who know they can make a buck by providing quality products, which provide detail, realism, and hours of extra enjoyment inside the framework of flightsim. Most payware has a bit more polish, detail, and realism in all departments than freeware. Every now and then some free stuff comes along which happens to be as good or better than the payware stuff! It’s a real treat, and those who develop the add-ons for free do it for the satisfaction and the recognition. It’s a hobby unto itself inside the domain of flight simming. Payware is very prevalent for flight simulator. There definitely is plenty to go around and the old adage “caveat emptor” is one which every buyer should heed.

I’ve been using flight sim for many years now and I have seen a lot of free and pay add-ons that have come and gone. I am very selective about what I will pay for. It has to be measurably better than anything that I can get for free. Some folks snatch up everything that comes along, but my budget for flight sim won’t allow that. One area where I weaken my stance a bit is when it comes to historical aircraft. Microsoft can’t provide too many examples of airplanes and I believe they have done a good job overall providing a nice selection of different types to fit the bill for just about everyone. Since there are many types of great aircraft we have many kinds and types of add-ons for which one can pay to have. Scenery is also a huge area where there are many products both free and payware from which to choose.

I like to concentrate on those aircraft I personally enjoy from history and ones that I have flown in real life. Some of these include the really popular WWII fighters and bombers. This is where Wings of Power comes into the picture. Not too long ago, this Farmington, Connecticut based company began producing add-ons for Combat Flight Simulator. Their reputation for quality and service has been excellent. While I’m not a huge CFS fan, I was aware of the name when they started working on aircraft for FS.

Reviewing payware add-ons for Flight Simulator is a tricky business. A lot of things are really based on some very personal assumptions. My likes and dislikes are different from the next simmers. My thoughts about modeling, sound, flight dynamics, etc. are skewed in a big way due to my experience as a real world pilot. When I talk about add-ons to flight sim, I try to do it from an objective standpoint. I’m also a fairly avid and accomplished texture artist and have been involved with many sims over the years in this regard. So I approach reviewing in a way that reflects this. I’m a lot less concerned with the flight model as long as It’s convincing to me. Since I value modeling skills over the flight dynamics, my reviews tend to be more about that. Rest assured though that if I sense anomalies in a flight model, I’m going to let you know. I have never been concerned with things like a few knots difference in book speeds, turning capability, or climb capabilities. It’s just not that big a deal to me. This is a sim, almost a game, and due to it’s limitations will never really duplicate reality. It does do a damn nice job though with the basics and the true art form of a good add-on is fooling us into thinking this sim is better than it really is!

I think I should mention here that I possess what I believe is probably the finest payware aircraft currently in existence for Flight Simulator. I tend to measure every aircraft I might pay for against it. Its truly benchmark stuff in the flight sim world. I’m referring to none other than Real Air’s Spitfire. Everything about it screams quality and perfection. It has few if any vices and a cockpit and flight model second to none. If you’re familiar with the world of aircraft add-ons at all you have heard of this one. I guess you could consider this one a “Ten” and something everyone else should be striving for with their payware.