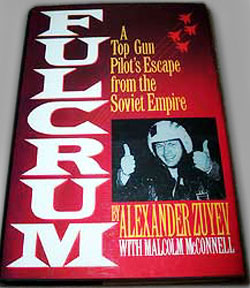 From Russia with MiG… Alexander Zuyev

Truth is stranger than fiction! Any respectable aviation buff has probably seen the 1982 film “Firefox” which tells the story of an American sent to the Soviet Union to steal “the most advanced warplane ever built”. And while the adventures of Mitchell Gant make for great prose, they pale in comparison to the life or death decision made by Captain Alexander Zuyev to leave the Soviet Union and deliver one of his nation’s newest fighter aircraft, as well as his own extensive knowledge of Soviet tactics, technology and capabilities, into the hands of its enemies.

Until I found this book on Amazon.com while searching for books about the MiG-29 Fulcrum, I had never heard the name Alexander Zuyev before. A quick Google search yielded little additional information, and when I saw a hardcopy inscribed by the author himself for a mere $4 US I couldn’t pass it up!

This book chronicles Alexander Zuyev’s rise through the ranks of the Soviet air force during the 1980’s. A decade which saw many changes and challenges for the Soviet Union. The war in Afghanistan, the Chernobyl disaster, and the radical reforms of Glasnost and Perestroika all occurred during this turbulent decade. Against this backdrop Alexander Zuyev narrates not only his professional career, replete with technical information about his experiences with the aircraft and operational procedures of the Soviet airforces, but also one man’s journey from dogmatic socialist to disillusioned defector. The story of his rising awareness about the true nature of Soviet socialism is the story of an entire empire’s awakening.

Having grown up and lived all my life in a western democratic economy it was hard for me to fathom the conditions under which the Soviet people of this era lived. Propaganda, institutional corruption, economic hardship and state sponsored western xenophobia are all characteristic of the views about the Soviet Union afforded to me by my limited historical education. But this book made them real in a way that surprised me. From the day to day aspects of life, navigating through the world of military and socialist party politics, to the slow realization about the lie of the socialist dogma as practiced by the Soviet Union, Alexander Zuyev brings this decade to life. It places the readers in a position of deciding for themselves how they would have dealt with it all.

Fulcrum begins near the end, with a graphic detailing of the initial theft of the aircraft, then proceeds through a description of Alexander Zuyev’s early life, his flight training and deployment to a MiG-23 squadron where he narrowly avoids deployment to Afghanistan when he is selected as one of the first pilots for MiG-29 training. Much of the book after that is a litany of the various revelations and events that bring about the realization that not only has he been misinformed his whole life, but that his position in the military is more for defense of the criminals in charge than the people he swore to protect. The tipping point of his personal “fulcrum” began with the persecution of his mother in a state psychiatric hospital for daring to go against the status quo, and ended with the massacre of Georgian demonstrators in Tblisi in 1989. Having been stationed in Georgia for the majority of his career, enjoying its resorts on the Black Sea, skiing on Mount Elbrus, and getting to know its people, Capt. Zuyev was greatly saddened by the fact that, from his information, the attack was not in response to violence by the demonstrators, but was in fact an organized military operation designed to quell dissent. This was not what he signed up for. His initial plan was to get discharged from the military and then attempt to sneak across the border into Turkey or Iran. When his efforts to be discharged failed, and then the Tblisi incident occurred, he decided it was not enough to just leave. He must exact vengeance upon the system that he viewed as criminal. This is the moment he decided that he would leave his country not on foot, but in the cockpit of a MiG-29. I will refrain from giving specific details of his one man operation in deference to those who would prefer to read it in his own words.

Not to give the impression that this book is merely a political diatribe, rest assured there are a lot of juicy technical details of the MiG-23 and MiG-29, as well as detailed accounts of operational tactics in use at the time. I bought this book because LOMAC has given me a healthy interest in Eastern bloc aircraft and tactics. Fulcrum didn’t disappoint in this respect. One of my favorite sections dealt with the initial combat readiness trials for the newly formed MiG-29 groups. I can only describe them as “red flag” type exercises, that test not only the aircraft and pilots, but GCI, ground crews and tacticians as well. During this exercise a test of their readiness to deploy the RN-40 tactical nuclear device was conducted. Detailed accounts of the authorizing, arming, and deployment of this weapon, as well as the revelation that the procedure was a carbon copy of the procedures used by US forces learned through the tortured interrogations of US airmen in Vietnam, were particularly illuminating.

Following his escape Capt. Zuyev became an advisor on soviet equipment and tactics to the United States. He helped to dispel many rumors and gave our pilots a healthy respect for the new generation of Soviet fighters and tactics. Sadly Alexander Zuyev died in the spring of 2001 when flying a Russian Yak in formation with other aircraft. But he lived long enough to see the end of the socialist regime that dominated his homeland for more than 70 years.

This book can be had from Amazon.com (remember to use SimHQ’s link here) in hardcover and paperback editions for very reasonable prices. If you are interested in the cold war, Soviet history, Russian A/C and tactics, or are just in the mood for a personal story of one man’s inspirational journey through a difficult life, you could do a lot worse than “Fulcrum: A Top Gun Pilot’s Escape from the Soviet Empire”.

If you are interested in the subject of defections in general, you might also want to check out “MiG Pilot: The Final Escape of Lt. Belenko”, which details the defection of a Soviet pilot and his MiG-25 to Japan in 1976.

ACIG.org also has an excellent online article that deals with the history of military aviation defections here. 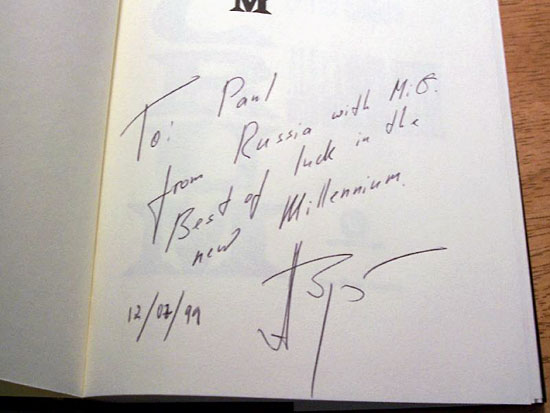 Great, NOW you tell me!
A Conversation with Mike “Crash” Craycraft of Ghost Skies