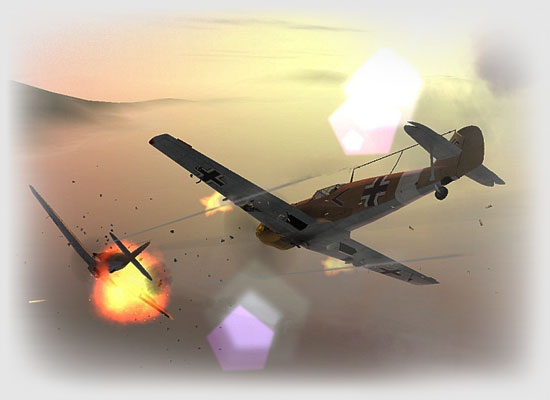 IL-2 Forgotten Battles/Pacific Fighters can attribute much of its success to a rock stable Multiplayer feature. Although the game has an excellent single play mode against computer controlled opponents, there is simply no comparison to the excitement and skill required for dog-fighting against other human players online. With the help of Hyperfighter, dogfights and online matches are available to players and virtual squadrons 24 hours a day. With so much online competition available, questions that arise are how does one squad rank against another? And more importantly, how can my squad gain the practice and experience to improve our skills? Ghost Skies, an online competition and tournament league, provides a venue to answer those questions. Founder Mike “Crash” Craycraft explains what Ghost Skies is all about and shares his thoughts on the future of the project.

Mark: How is Ghost Skies different from online campaigns?

Mike: Ghost Skies isn’t another online campaign or virtual war. I’ve flown several virtual wars where I’ve flown entire missions for an hour with no contact. The historical immersion may be there, but I’ve got to have action to really make my time worth while. I don’t like flying long flights where you don’t know if you’ll find the enemy. Some people enjoy that stuff, but I usually find it boring. In my experience, nothing in FB/PF compares to the adrenaline of a tough dogfight. But, on any given virtual war mission, you never know if you’re going to get that.

Ghost Skies isn’t a gamble. You won’t miss out on the action, because we are an organized league centered and focused on dogfight competition. You know you will meet the enemy and what his strength is. Squadrons are pitted against each other on equal footing. The questions that leave you on edge are: How good are they? How are they going to come after you, and what are you going to do about it? And, unlike dedicated dogfight servers, which tend to be a bit disorganized and somewhat chaotic, G.S. provides an organized arena where squads can measure their successes and failures. Because our format is so action packed and dogfight intense, G.S. has helped many squads enhance their dogfight skills and improve their team coordination which they can take to other arenas.

Mark: Is it safe to say that Ghost Skies is a ladder system?

Mike: Yes, it is, but it is a little different than say a First-Person-Shooter ladder. Your position on the ladder only shows your progress. It’s the Finals that will determine the overall Ladder winner.

Mark: Does the ladder work on a point system or strictly on Wins and Losses?

Mike: Points are used to determine a match and are tabulated into stats for informational purposes. Ladder rankings themselves are determined by a win percentage. In previous cycles, we had a system that used points to determine ladder rankings. The number of points earned were dependant upon the settings used for a given match. However, we found that having a format based on a win percentage was not only easier, but a fairer means of determining a champion.

Mark: How are Wins and Losses recorded?

Mike: When a match is completed, the loser reports the match on the Ghost Skies website. The winner then confirms the win, and the match goes on record and is added to the player and team stats. The whole reporting process takes only minutes.

Mark: Do players have to join a team in order to play in a Ghost Skies match?

Mike: Yes. Unlike campaign engines that automatically enter your name in the database once a mission is reported, Ghost Skies doesn’t allow for unregistered players to compete in matches. So, a player that wants to compete in one of our team vs. team ladders must first manually register an account, and then get added to a roster.

Tournaments that are open to the public, such as the NaturalPoint Double Domination 2v2 tournament we recently held, still require registration with the site and creation of a team in order to sign up for the tournament. But those teams are separate from the competition ladders. Ghost Skies also has plans for a 1v1 ladder in the near future. So players would obviously not need to be associated with a team for that.

Mark: What is the minimum number of players to form a team?

Mike: We require at least 5 players for a team. This is to help ensure a sufficient level of activity can be maintained; however, matches can be 2v2 up to 8v8. We just require 5 pilots to be part of the roster. This is unless you are going to play in a 1v1 ladder. The 1v1 Ladders are open to anyone, regardless if they belong to a team or not.