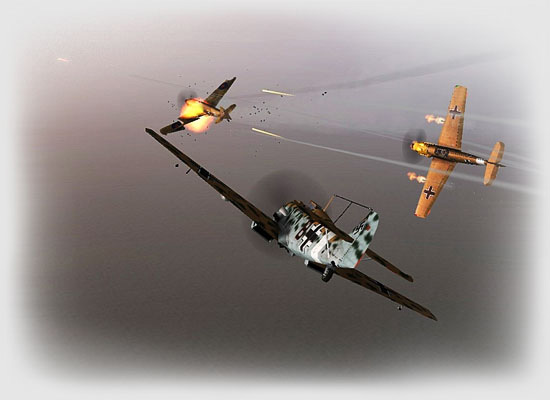 Mark: How are teams added and formed for Ghost Skies?

Mike: Existing Squadron (team) leaders first have to create their own “player” account, and can then go through the process to “Create a Team”. Team members are then added to the roster as they join the website. We’ve made it pretty simple and straightforward by organizing a “Get Started” menu on the main page.

Mark: How can individual players new to GS go about joining a team?

Mike: It’s quite simple. At the “Get Started” menu a person just needs to “Create a Player”. Once the account is validated, you inform the Squadron Leader who can add you to their team’s roster. If a player isn’t a member of a team, and would like to find one to join, they can register with the Ghost Skies forums and visit the “Recruiting” forum. There they can connect with active teams who are looking for pilots.

Mark: Are the ladders set in a Historical or a Non-Historical format?

Mike: We currently have two team vs. team ladders. “Ghost Skies: Legends” is the Closed Cockpit, Full Difficulty (with minor adjustments) ladder. It is Axis vs. Allies fought on historically based maps and plane match-ups. Teams also swap sides as to allow them a chance to fly both sides in a match.

“Ghost Skies: Pyro” is open cockpit and with more relaxed settings. It isn’t historical, but teams are restricted to fly planes within a certain year. Most IL-2 fliers prefer a “Cockpit-On” environment, but there is a fiercely competitive niche within the “Open-Cockpit” fliers, and Ghost Skies does what it can to provide players of all preferences with a means of competing.

We also are starting two 1v1 ladders called “Ghost Skies: Brawl.” “Open Brawl” will be relaxed settings like “Pyro”. “Full Brawl” will be full switch, except for Speedbar. Both ladders will be using the same format and theme, with just the settings differentiating them from each other. On April 14th Ghost Skies will be starting the first Brawl cycle, which will Tailhook fighters in the middle of the ocean, where a successful carrier landing will be a requirement for a successful kill.

Mark: Do players begin a match in the air or do they take-off from an airfield?

Mike: Players start on the ground in the team vs. team ladders. In previous cycles we had an option for “Air-Start”, but we found that having that “Refly” button handy was just too tempting for some players. We also found that players have a better chance to get ready and focus themselves before a match with “Ground-Starts”. However, in the 1v1 ladder we do use Air-start. This minimizes time so players can fly more matches in a shorter amount of time.

Mark: Do the matches have a time limit?

Mike: “Legends” matches are an hour long in the air. That’s 30 minutes flight time on each side of the mission, with a quick break for a re-launch in between. So, they last a little longer than an hour, of course, when you factor in getting all players in and ready. “Pyro”matches are set for 45 minutes of flight time. We have a scripted timer that orchestrates the sequence of the match. It starts the match, gives the player notice of how much time is left during the match, and ends the match. “Brawl” matches don’t have a time limit. But do have a fuel limit, so you don’t have much time to mess around.

Mark: Are there any penalties if a player crashes?

Mike: Not like I wish there could be. But that is a limitation of the game. In our matches, the bailout option is deselected so that players will essentially either have to land their planes, keep flying until the timer runs out, or crash. We use the ‘no-bailout’ setting as a means to encourage players to fly with self-preservation as well as to promote dogfight action. As I mentioned earlier, a match is determined by the total points accumulated within a game. If a player crashes, their team will not gain the full score of kills that that player made.

I would much prefer to use a “Kill-to-Death” ratio to determine the winner of a match. Obviously, IL-2 doesn’t have that capability incorporated into the game. But what it does have is a log generator that collects stats on things like kills and deaths. I have been trying to find a suitable third party program that specifically fits G.S. needs that could read these logs to tabulate a kill-to-death ratio. But in the meantime, we have developed our format with what we have at hand.

Mark: How are the missions generated? Are they user-scripted?

Mike: We don’t use a mission generator since we’re not a campaign system. Ghost Skies is a dogfight competition and therefore uses pre-scripted “Dogfight” missions. Our missions are built specifically for either the Pyro ladder or the Legends ladder. Because Legends is a historically based match-up, I’ve had a lot of volunteers help in building them. We also have a separate Tournament mission used specifically for our prize tournaments.

Mark: How are the Ladders varied?

Mike: For the “Pyro” ladder, plane sets are rotated to reflect any year of the war. Pyro also has six missions based on the same map with summer and winter versions. For each season, there is a “Clear-weather” mission with a mid-day time and a “Dawn” mission at sunrise. The dawn missions are a little hazy with light clouds. These four missions are used for regular rotation. In addition, both seasons have heavy weather maps. We use those for the “Game of the Week” missions.

“Legends” has a good number of historic missions with different plane sets, maps, weather, and times-of-day. Every mission is different and is based on a historical scenario. The plane sets have been researched and tested to be fair and balanced. I think the heaviest weather in Legends is “poor”, and that’s only on Battle of the Bulge, in ’44, which is historically accurate for the weather they actually experienced. We didn’t want weather to affect competition, so we keep it rather light throughout the missions.

“Brawl” will have different themes each cycle. As I mentioned, the first theme will be Pacific Theater Tailhooks. I have a couple of follow on ideas, such as Eastern Front, Battle of Britain, and so forth. It should keep it entertaining.

There is also a “Game of the Week” for Pyro, which allows for a fun alternative to the standard ladder match. Both ladders offer intense competitiveness, but with a different approach to how the pilots fly the match. The best part is the opportunity for varied play. There will never be two matches alike.